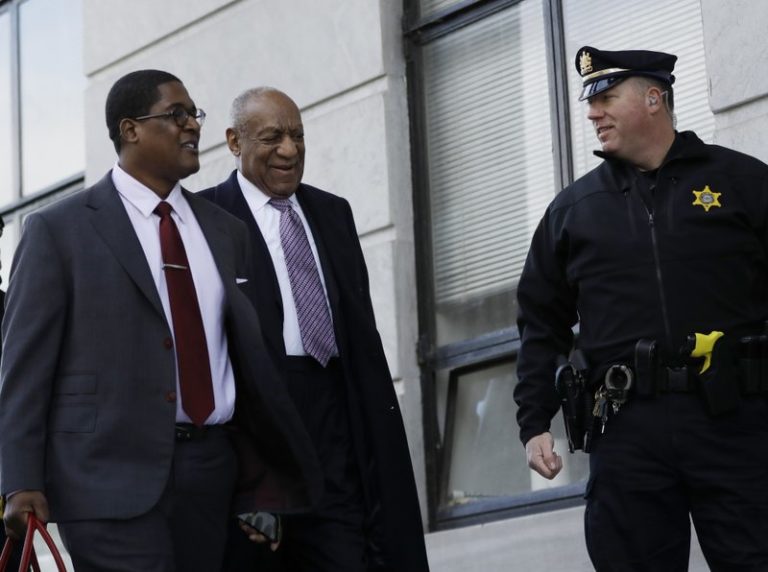 Bill Cosby has arrived at a suburban Philadelphia courthouse for the eighth day of his sexual assault retrial.

As the 80-year-old comedian arrived Wednesday morning, spokesman Andrew Wyatt spoke to reporters and blasted the testimony from a police sergeant and detective at Tuesday’s trial.

He says that prosecutors were using “tools of incompetence to build monuments of nothingness.” Wyatt says Cosby’s defense thinks the case should be dismissed.

A police sergeant testified Tuesday that a suburban Philadelphia prosecutor closed the original 2005 probe hours after investigators met to discuss leads that needed to be followed up.

Jurors heard from a police interview in which Cosby acknowledged fondling his chief accuser’s breasts and genitals after giving her pills.

Jurors could soon hear explosive 2005 testimony about giving quaaludes to women before sex.

Prosecutors are expected to read a transcript of the 2005 testimony as early as Wednesday.

They’re saving for the very end of their case Cosby’s own words about using the 1970s party drug “the same as a person would say, ‘Have a drink.’”

Cosby’s old admissions about quaaludes have taken on new significance at the comedian’s sexual assault retrial in suburban Philadelphia after a half-dozen women testified that he drugged and violated them.

Cosby gave the deposition as part of a lawsuit chief accuser Andrea Constand filed against him. He settled in 2006 for nearly $3.4 million.

The Associated Press doesn’t typically identify people who say they’re victims of sexual assault unless they grant permission, which Constand has done.