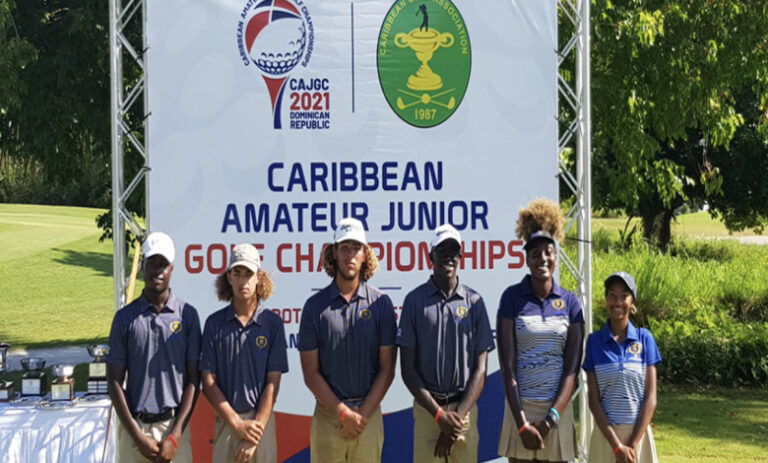 Competing against The Bahamas were Barbados, the Cayman Islands, the Dominican Republic, Jamaica, Martinique, Puerto Rico, Trinidad & Tobago, Turks & Caicos, and the US Virgin Islands.

On day one, the low score for the girls for Team Bahamas came from Chemari Pratt with a score of 81, putting Team Bahamas in second place in the Girls 13-and-Under Division. The low score for the boys came from Kerrington Rolle with a score of 77, putting the team in third place in the Boys 13-and-Under Division.

Chemari Pratt said: “I felt like I played great, but I can always do better. I made sure to take it one hole at a time and remember that every shot counts. On one hole, my second shot went into the hazard by the water almost on rock and I hit it to get over the bunker and onto the green, and it was a pretty nice shot after all. My greatest highlight of the day was that putt on 18 for par. It was a pretty great putt that I felt I couldn’t miss because there was a lot of people watching.”

Kerrington Rolle said: “I think I played okay. I started off on hole number one with a bogey, but then recovered with a birdie on hole two. I hit a solid iron shot onto the green and one putted. I was able to put the last hole out of my head, and cleared my thought process. I birdied hole eight with a great drive which drew to the left and set me up for a birdie chance. For the rest of the holes I just got up and down very well and finished out for 5-over-par. The important thing is to calm your nerves in those hard shots and not let the overwhelming thoughts cloud your shots.”

Farquharson said: “I really loved the course. It was my first experience in the Junior Caribbean Championships and it was my favorite golf traveling experience. Everyone there was very nice and respectful of both the game and the players. The course was COVID safe and I felt very safe there. The course is very nice and open, the holes were short but it will always be a special memory in my head mainly because I broke my personal record almost everyday. The course was very hot but it was still one of the best courses I have played at. I played some of the best golf I have ever played on this course so it will always hold a special place in my heart.”

Nyah Singh said: “My experience on the course wasn’t one I was expecting, but after the three days I was content with knowing that I improved each day. What I liked most about the tournament was the beautiful course, as well as its conditions. If I was chosen to do this experience again, I would definitely choose to trust myself and my ability, as this is where I fell short on the first day. Playing in tournaments like this are helpful to me, because it allows me to realize my weaknesses, and encourages me to want to play better. Not only am I thankful for this experience, but I am thankful for those who uplifted me throughout this tournament.”

Alex Dupuch said: “Overall, I felt like it was a great experience to play in this tournament. I was very excited to be a part of the national team. I was disappointed in the way I played, as the course was very easy to attack and I did not take advantage of that. It always hurts to know you could’ve played better than you actually did. However, it was a great learning experience for me and tells me what I have to work on for next time.”

This year’s captain Heathcliffe Kane was not at his best as he finished 10th, but said he was proud of how the team played, especially with it being a team of nine first timers at that level.

“I’m proud of how each of the players performed,” he said. “I know some of them didn’t play their best but they should know that they, as a player, can be their best friend or their worst enemy. As a player, you should not beat yourself up too much, but instead reflect on the good things, as well as the bad, and how you can make them better.”

Team Bahamas is looking forward to competing in 2022.