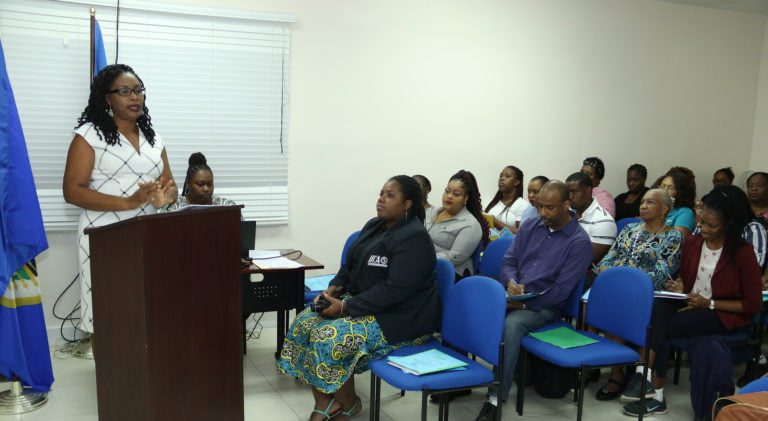 NASSAU, BAHAMAS  – Social Science teachers are swapping roles, becoming students for one week as they prepare to review and redevelop the curriculum.

Creating blogs and drop boxes, exploring livestock and crops on a farm, learning about international organizations (OAS and IICA) and civics are just a few of the areas that senior high school teachers will be exploring in the Ministry of Education’s Social Sciences Summer Professional Development Workshop.

“Planting, Preparing and Politics in the Social Sciences” is the theme for the Workshop which officially opened Monday, July 8, 2019 at the Organization of American States (OAS) headquarters, Village Road, and will end on July 12, 2019.

Between 45 and 70 teachers representing public schools in New Providence and several Family Islands are participating in the Workshop which includes visits to the House of Assembly (HOA) and Down To Earth Farm, a tour of Delancey Town, and a session on “Technology in the Classroom”.

The curriculum for public senior high schools is being revitalized and reformed and the Ministry of Education is preparing teachers to have an appreciation for the new “narrative” that is coming on stream.

Perlene Baker, Education Officer, Social Science senior high schools, said, “We don’t just give you the literature; we want you to see it in action.”

“We’re going to a farm tomorrow. We’re [also] going to do some technology and teach people how to design blogs.”

On Thursday, the teachers will take a close look at the House of Assembly. In addition to a tour, the Hon. Halson Moultrie, Speaker of the House of Assembly, will inform them of his role as Speaker and the role of Government and Opposition leaders.  David Forbes, Clerk, will also make a presentation on ceremonial practices, history and seating of members in the chambers.

Monday’s presenters included Phyllis Baron, OAS representative, who outlined the role of the OAS in The Bahamas. She highlighted that The Bahamas has consented to host the General Assembly of the OAS in 2020.

Shaccara Lightbourne, representative for IICA, gave an extensive overview of the agency. She said the mission is to encourage, promote and support member countries’ efforts to achieve agricultural self-sufficiency.  IICA provides technical assistance in all areas of agriculture including government and the private sector.

Ms. Baker said a special feature of the Workshop is a presentation by Etienne Claes, the Honorary Consul for Belgium, who will share his extensive research on Bahamians who fought in World Wars I and II and are buried in Belgium.

“That narrative needs to be told in our History curriculum document,” she said.