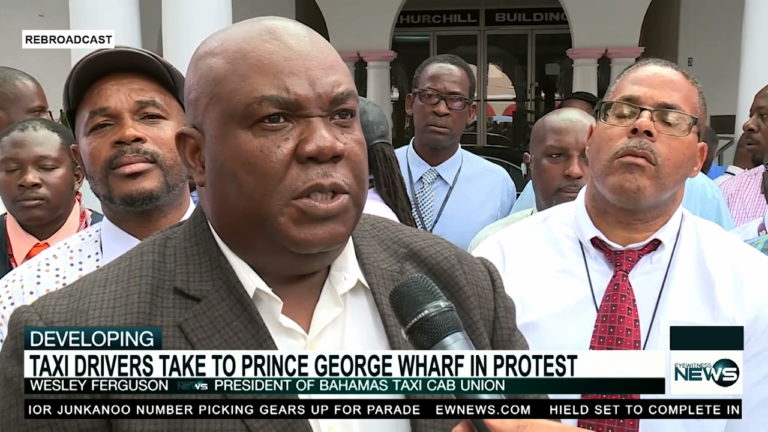 The move to strike comes after months of complaints against tour companies and private limousine drivers who taxi cab drivers claim are taking a lion’s share of their daily income.

On Tuesday, the irate cab drivers encircled the vehicle of Prime Minister Dr. Hubert Minnis, waiting for him to exit the weekly Cabinet meeting at the Churchill Building, with the hope of having him address their concerns, which the union said continues to fall on deaf ears.

Ferguson said union members are “bone-tired” after countless attempts to get the government’s attention. At this point, he said the union feels as though they are being treated like ‘vagrants’.

“Just over two weeks ago on a Monday, we withdrew our services from Prince George Wharf. We got a call from the prime minister and he asked us to stand down for him,” Ferguson claimed.

“He was about to travel and as soon as he returned, which was that Wednesday, he said that he would get in contact with the union, meet with us, and resolve the problems that we have.

One of the most pressing concerns of the union is persons who solicit business at the Prince George Wharf.

“To this date, if you ask a person if they need a taxi on the wharf, it’s a criminal offense – that’s an offense [where a person can be arrested],” he said. “I have a taxi driver who spent eight hours in a cell because he asked a tourist if they would they like to have a taxi. When in this Bahamas has a taxi driver become such a low life?”

Ferguson said it is also his belief that some taxi drivers are suffering because of the recent security advisory issued by cruise ships.

Vernal Moss, a local cab driver, claimed that the major cruise lines are infringing on their income.

“On the cruise ships, they organize their tours and they sell all the tourists bus tours,” Moss explained.

Taxi drivers previously protested earlier this month on January 11 at the Lynden Pindling International Airport. Numerous taxi drivers refused to show up for work, a move which forced tourism officials to find alternative means to get visitors to their local destinations.

This first sit-out came on the heels of months of complaints against tour companies and private limousine drivers who taxi cab drivers claim are taking a lion’s share of their daily income.