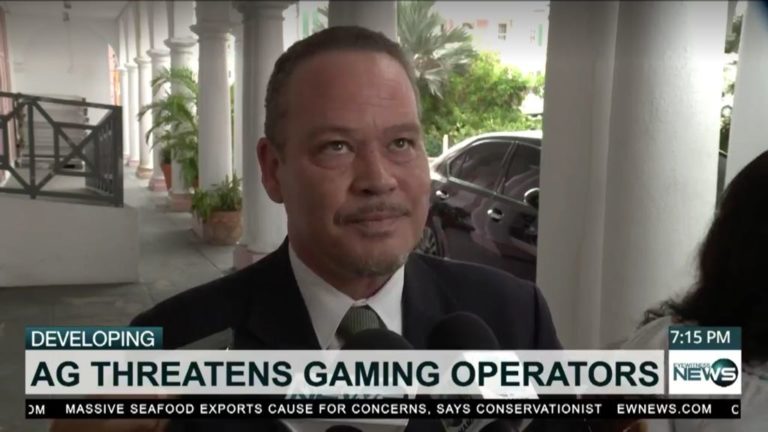 A war between government and gaming operators is looming as the Bahamas Gaming Operators Association (BGOA) said Monday that it will sue the government over its proposed “discriminatory” tax regime, which the Attorney General said the government is prepared to fight.

Senator Carl Bethel told reporters outside Cabinet Tuesday that the government is resolute in its position that Parliament has the right to set tax rates and that what is passed in Parliament must be obeyed by all citizens.

“If they sue, they’ll be fought in court,” Bethel said.

The Minnis administration has proposed in its 2018-2019 Budget communication taxation on profits of gaming operators of up to 50 per cent, which has left the BGOA vehemently opposed to the tax.

“This is nothing more than economic profiling and it’s most unfortunate,” said BGOA President Gershan Major in an earlier interview with Eyewitness News in which he claimed the issues comes down to race.

However, the Attorney General insisted otherwise, echoing the sentiments of Deputy Prime Minister Peter Turnquest, who had earlier shot down the assertion as well.

There has also emerged the notion that this form of taxation could lead gaming houses to once again take their operations underground. To that, a very defensive attorney general said, “If they go underground, they’ll be dug up.”

“We have a whole arsenal of new powers under the Proceeds of Crime Act, to deal with persons who decide they want to break the law. So we’re not worried about whether they try and go underground, break the law, or go to court.

“Our tax rates have been benchmarked against what the standard rates of taxing of gaming in other jurisdictions, both in this region and internationally. You’ll notice that nothing they’ve said attack that fact.”

On that position, Eyewitness News presented the Attorney General with the argument put forth by gaming operators who earlier argued that the way gaming operations are set up in other jurisdictions, differs entirely from how things operate in this country.

In particular, BGOA pointed out earlier that the countries which the government has used as benchmarks have national lotteries.

Still on the defense and obviously bothered, the attorney general responded with rolled eyes and a raised voice:

“And they also have income tax too and corporate taxes too. They also have a host of other taxation that affects gaming operators, that we do not have.

“So, you know, don’t argue about apples and oranges, because if you want to talk about orange, I could say what affects the orange. We are talking about The Bahamas now and the effective rate of taxation, never mind in what form it takes, it’s on par with other jurisdictions.

When Eyewitness News pointed out to the minister that he had had just compared The Bahamas to other jurisdictions in his previous rationale on the taxation, the hostility continued.

“But my broader point is that the effective rate of taxation paid by gaming operators in other jurisdictions is no lower than that we propose in The Bahamas.”