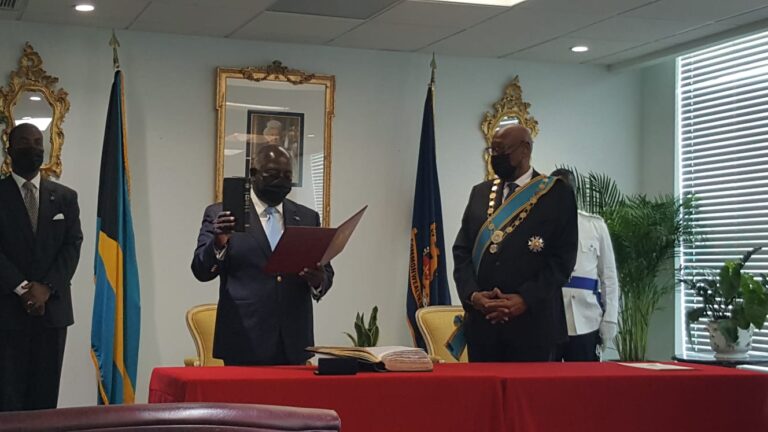 NASSAU, BAHAMAS — Philip Brave Davis, the leader of the Progressive Liberal Party (PLP), was sworn in as the fifth prime minister of The Commonwealth of The Bahamas yesterday during a private ceremony at the Office of the Governor-General at One Montague Place.

It was not publicized until several hours later.

In a statement, Bahamas Information Services (BIS) advised that Davis “decided on a private swearing-in ceremony this morning”.

“There will be a public opportunity tomorrow when he will receive his instruments of appointment from the governor-general.

BIS also said it was advised that the deputy prime minister may also be sworn in today.

It advised the media that it would confirm as soon as details become available.

The ceremonial swearing-in is expected to take place at 10am, according to PLP officials.

Davis and his wife Anne-Marie, who arrived at Jet Aviation Nassau from Cat Island yesterday morning, was greeted by a large crowd of PLPs, including soon to be sworn-in and former parliamentarians, party supporters and others officials.

Davis told the media he was grateful to the electorate for “speaking so loudly”.

“A new day is really necessary for this country and a new day they have,” Davis said.

He underscored that there were seven women under the PLP’s banner elected to serve in Parliament.

After greeting a large crowd inside the waiting area of the airport and exchanging celebratory remarks and hugs, Davis got into an awaiting vehicle and left the airport.

According to unofficial results from the Parliamentary Registration Department up to Thursday night, the PLP swept the election, capturing 32 seats, while the Free National Movement secured seven.

A recount of the results was ongoing as of 5pm Friday.

In a separate interview, Freetown MP Wayne Munroe thanked his hardworking team and Bahamians for the mandate to serve.

Golden Gates MP Pia Glover-Rolle said the “ceiling is broken” and the elected women to Parliament will pave the wave for young women in The Bahamas.

Speaking to the PLPs victory, Seabreeze MP Leslia Miller-Brice thanked constituents for selecting her to represent them, and said the PLP has committed to work for all Bahamians, and follow through on the party’s blueprint for the country.

“Getting to work is the most important thing we can do,” she said.

“Our country is in crisis and we are here. Leadership, we need to elevate our leadership and we’re going to do that. We will rise to the occasion and get the job done.”

Her father, and former Tall Pines MP Leslie Miller, said he believes “God decided he was going to fix things right and give us a new day, and that is exactly what happened yesterday”.