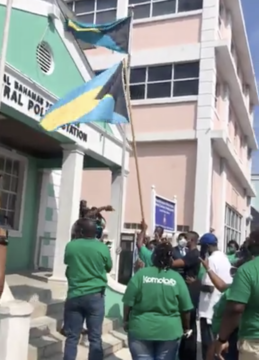 NASSAU, BAHAMAS — The matter regarding the arrest of several Democratic National Alliance (DNA) members has been turned over to the police legal department for further review, said Commissioner of Police Paul Rolle yesterday.

DNA Leader Arinthia Komolafe and several others were questioned for over five hours at the Central Police Station on March 22 in relation to a demonstration on March 3, during which the commissioner said the group “forcibly sought to gain their way into the Parliament”.

National Security Minister Marvin Dames denied any notion of political interference in the matter and told the media that the DNA tried to overrun Parliament while officers suffered injuries in their demonstration.

The DNA said they were “disturbed by the baseless accusations” and demanded an apology and the minister’s resignation.

The party has advised it is seeking legal advice regarding the matter and does intend to take action against the government.

Rolle, who was responding to questions from the media yesterday, said: “I have my legal folks dealing with that and I wouldn’t comment further on that at this time.”

The commissioner added that until the police legal department is completed with its review, he does not intend to address the issue further.

“I have respect for the process. I haven’t spoken to them as yet but I have my police attorneys…and they have been giving me instructions on what to do… I imagine when it’s done they will come back and make a comment.”

The commissioner has said that even though it took three weeks to take action for an event that happened at the beginning of the month, he has up until a year to bring charges for matters such as this.

Dames has maintained that the commissioner acted in good faith.

He has also said the commissioner advised him that his officers did not take action at the time because he did not want it to appear that he was doing something wrong or to interrupt Parliament.

Prime Minister Dr Hubert Minnis has also said he had nothing to do with the arrests of those DNA members and has insisted that “nobody’s above the law”.