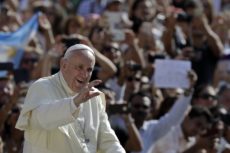 VATICAN CITY (AP) — Pope Francis has lamented how Irish church authorities failed to respond to the crimes of sexual abuse, speaking during his first public appearance at the Vatican after bombshell accusations that he himself covered up for an American cardinal’s misdeeds. Francis dedicated his general audience Wednesday to his weekend trip to Ireland. […]