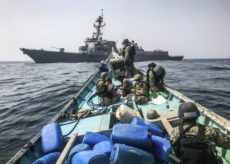 DUBAI, United Arab Emirates (AP) — The U.S. military said early Friday it seized over 1,000 Kalashnikov assault rifles being smuggled by small ships in the Gulf of Aden amid the ongoing war in nearby Yemen. The seizure by the guided-missile destroyer USS Jason Dunham may mark the first such interdiction of weapons at sea […]