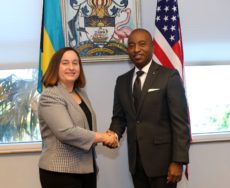 A new Charge d’Affaires has been named to lead the United States Embassy in The Bahamas. Stephanie Bowers, the second female told the position in the last ten years, paid a courtesy call on Minister of Foreign Affairs Darren Henfield at his ministry yesterday. During the meeting, the two discussed matters of mutual interest to […]