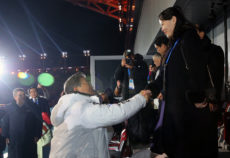 PYEONGCHANG, South Korea (AP) — It was a historic moment, and it happened even before the Pyeongchang Winter Olympics had officially begun. As South Korean President Moon Jae-in and his wife greeted VIPs in their dignitary box to watch the opening ceremony, they turned to shake hands with North Korean leader Kim Jong Un’s younger […]