Pedro Morley had a gun held to his head and his teeth punched out NASSAU, BAHAMAS — A man who was assaulted by a police constable and held at gunpoint in 2019 has been awarded over $82,000 in damages. According to court documents, Pedro Morley and a woman were speaking outside of the downtown nightclub […]

NASSAU, BAHAMAS — A senior police officer under investigation for allegations of police brutality officially retired from the force at the end of last month, Eyewitness News can confirm. Assistant Superintendent of Police Derrick Ferguson was among several officers discharged from the Royal Bahamas Police Force (RBPF), having retired on pension. His retirement took effect […]

NASSAU, BAHAMAS — A set of young men said they have lost trust in the Royal Bahamas Police Force (RBPF) in light of recent police brutality incidents. This comes after a string of police-involved shootings and reports of police using excessive force across the island inundated headlines over the past several weeks. 22-year-old Uriah Ferguson […]

NASSAU, BAHAMAS — Minister of National Security Marvin Dames said yesterday there is “no place” in the armed branches of law enforcement for rogue officers who act in contravention of the law and act improperly against the people they swore an oath to serve and protect. He was referring to an officer being placed on […] 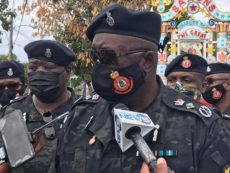 NASSAU, BAHAMAS — Police have launched an investigation into allegations three young men were brutalized by a senior officer while in custody. The alleged incident was purportedly recorded by one of the victims, and in it, a man who refers to himself as Assistant Superintendent of Police Derrick Ferguson can be heard slapping and berating […]