Government’s $65 million acquisition of the Grand Lucayan resort will not include the three properties on the hotel strip, according to Minister of Tourism Dionisio D’Aguilar. D’Aguilar revealed during government’s recent tour of the struggling Grand Bahama property, that while the Lighthouse remains open, the government will only be making repairs to and opening the […] 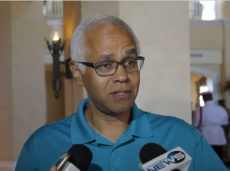 Had Grand Lucayan hotel owners Hutchinson Whampoa reinvested the insurance monies it received into the property following the 2016 hurricanes, the resort might have remained open.   That, according to Tourism Minister Dioniso D’agular who stated on Wednesday that government remains optimistic that partnerships that once existed with the Memories Resort at Our Lucaya including the Sunwing […]

No timeline for opening  Owners of the Grand Lucaya hotel in Grand Bahama – Hutchinson Whampoa – failed to reinvest into the property after collecting the insurance proceeds from damages sustained in 2016, which prevented the resort from reopening and in essence crippled the Grand Bahamian economy, according Tourism Minister Dionisio D’Agular, who made the revelation […]