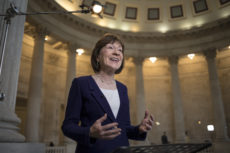 By HOPE YEN, Associated Press WASHINGTON (AP) — Two Republican senators said Sunday that President Donald Trump would be wise to keep a public silence on an independent investigation into his 2016 campaign’s contacts with Russia in the wake of news reports that he sought to fire the special counsel. The senators, Lindsey Graham of South […]