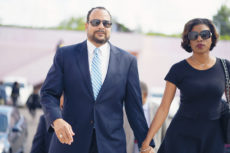 After a lengthy delay, the highly publicized extortion case involving former Chairman of the Public Hospitals Authority (PHA), Frank Smith; returned to the Nassau Street Complex. Chief Magistrate, Joyann Ferguson-Pratt, expected to move forward with today’s proceedings, which allege that Smith attempted to bribe and extort money from a privately contracted cleaning company, while he […]