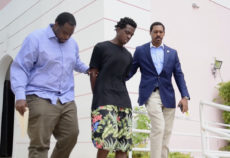 William Etienne, 26, appeared before deputy chief magistrate Subusola Swain charged with the August 24 murder of Alvin Strachan According to reports, shortly after 9 a.m., an armed male entered FML webshop on East Street and Balfour Avenue and exchanged words with Strachan before going into the restroom. A few minutes later, the assailant approached Strachan […]