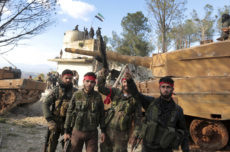 By MEHMET GUZEL, Associated Press KILIS, Turkey (AP) — Renewed clashes erupted on Monday on a strategic hilltop in northwestern Syria captured by Turkish troops the day before as Syrian Kurdish militiamen were trying to reclaim it. Turkish military officials cancelled a government-organized press tour to Bursayah Hill separating the Kurdish-held enclave of Afrin from the […]