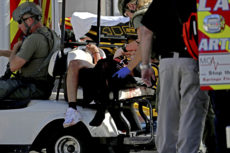 PARKLAND, Fla. (AP) — Just before the shooting broke out, some students at Marjory Stoneman Douglas High School thought they were having another fire drill. Such an exercise had forced them to leave their classrooms hours earlier. So when the alarm went off Wednesday afternoon shortly before they were to be dismissed, they once again […]