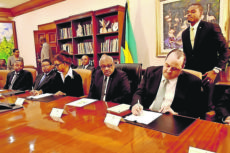 Krieger commits fraud, forges signature   Accused of misuse of investor funds in the United States, Peter Krieger, the man at the heart of the OBAN Energies controversy, is now accused of forging the signature of the company’s president, Satpal Dhunna. As cameras rolled and senior government officials looked on at the contract signing almost […]