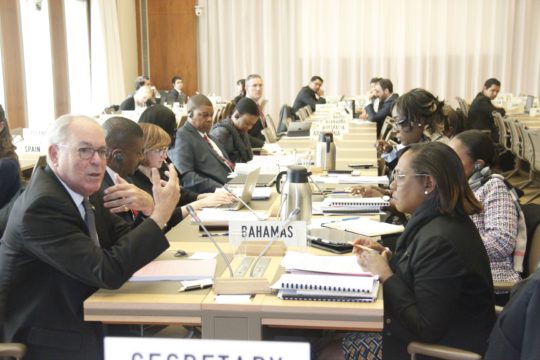 NASSAU, BAHAMAS – During the 4th Meeting of the Working Party on the Accession of The Bahamas to the World Trade Organization  held on Friday, 5th April, 2019 in Geneva, Switzerland, Brent Symonette, Minister of Financial Services, Trade & Industry and Immigration affirmed that The Bahamas will continue to be deliberate in its accession negotiations to ensure that WTO membership provides Bahamians with opportunities for meaningful participation in the ownership and prosperity of their economy.

Symonette noted that The Bahamas has a small population and a relatively open economy which highlights certain vulnerabilities, sensitivities and economic development needs, all of which must be taken into account during the accession negotiations. He stressed that any external shocks to such a vulnerable economy can set the country back significantly.

“The Bahamas is a developing country in every sense of the word; laden with the burden of providing for scattered populations over twenty nine  inhabited islands, annually under threat from hurricanes, subject to the vagaries of global economic factors and highly vulnerable to the consequences of climate change,” said Symonette.

“While our accession to the WTO, after more than 18 years would be historic, the Government of the Bahamas recognizes that the question which remains foremost on the minds of most Bahamians is: Is WTO membership and the changes it might bring good for a small island developing country like ours?  We believe the answer to be yes, but we must forecast this in the outcomes of our negotiations,” he added.

While noting that the tourism and financial sectors account for 75 percent of the country’s GDP, Minister Symonette acknowledged that WTO negotiations must also safeguard and strengthen the country’s most vulnerable sectors like agriculture–which accounts for about 2 percent of the GDP and comprises just under 3,000 registered farmers.

According to Symonette, during the negotiation process, The Bahamas has sought to use the tools made available by the WTO Agreements to simplify its tariff structure and has ratified its most sensitive agricultural products like poultry and various fruits and vegetables including bananas, pineapples, tomatoes and onions.

The Minister said that he understands the anxieties that Bahamians have about a small developing nation joining the WTO, especially when “the future development of the country is at stake”. But in a bid to enhance confidence in the WTO, he expressed his team’s commitment to transparency about the negotiation process and education about the WTO.

Said Minister Symonette, “The Bahamas wants to demonstrate to the Bahamian people and its private sector, that the rules-based international trading system works to enhance its economic prospects, reduce its vulnerability to external shocks, and create real and beneficial access to world markets not only for its goods and services, but also for the goods and services of others.”

The delegation from The Bahamas to the 4th Meeting of the Working Party was led by Minister Symonette. He was accompanied by Zhivargo Laing, Chief Negotiator for The Bahamas’ accession to the WTO, and other senior technical officers from the Ministry of Financial Services, Trade & Industry and Immigration, the Ministry of Finance, the Ministry of Agriculture & Marine Resources and the Bahamas Customs Department. The Bahamas Chamber of Commerce and Employers’ Confederation (BCCEC) joined the Mission as Observers. While in Geneva, the Bahamian delegation held a number of bilateral meetings with WTO Member States and meetings with Officials of the WTO Secretariat and other Geneva-based organizations to discuss ongoing and future technical assistance for The Bahamas.

As part of the Government’s ongoing commitment to transparency in this process, the Ministry of Financial Services, Trade & Industry and Immigration will continue consultations with the Bahamian public.