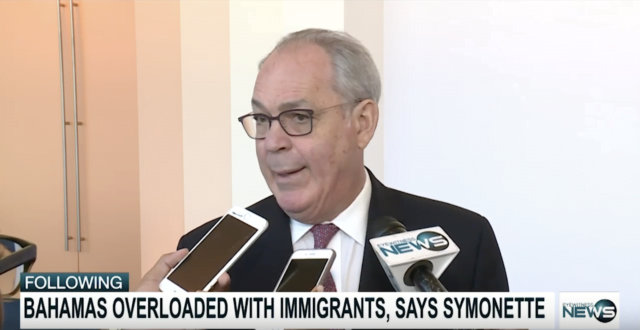 NASSAU, BAHAMAS – On the heels of comments made by the head of the Inter American Commission on Human Rights (IACHR), as it relates to the government’s handling of migrants, Immigration Minister, Brent Symonette said he has a difficulty with international organizations forcing their way of doing things on The Bahamas.

“I have difficulty when any International organization tries to force a sovereign country to do things that are not in the best interest of that country,” Symonette told the media on Monday.

“Since a boat load of persons arrive on our shores today, are we supposed to let them walk around the street until we decide when to repatriate them? These are issues we have.

“[We have] 100 thousand square miles of water and illegal immigration is a large problem. We spend about $1.6 million dollars a year repatriating non-Bahamians.”

The  IACHR hearing was held at the regional headquarters of the University of the West Indies in Kingston, Jamaica last Friday, May 10.

The request for the hearing was filed by Rights Bahamas, a local activist group, in conjunction with Robert F. Kennedy Human Rights, which is headquartered in Washington, DC.

This led the Bahamas government to be called before the 172nd session of the Inter-American Commission of Human Rights (IACHR), to respond to a petition from Rights Bahamas on the treatment of migrants.

Representing the government of The Bahamas at the session was State Minister for Legal Affairs, Elsworth Johnson

At the IACHR’s hearing last week, its President, Esmeralda Arosemena de Troitino, said detention was not the answer to tackle the country’s immigration challenges.

Troitino also brought up the issue of statelessness due to the lack of documentation.

But yesterday, Symonette explained that despite the organization’s belief, persons born in The Bahamas [to illegal migrants] have a right to obtain passport.

“First generation born in The Bahamas has the right to a passport in another country. They always have that so they are not stateless. Now whether or not they want to go and get that passport is a different issue. So, for a commission to say they are stateless, I have a different understanding of the law than what they are saying.”

Symonette advised the IACHR to take a look at ‘the total picture’ in The Bahamas when it comes to illegal migration.

“I don’t think a number of persons really appreciate the influx of immigrants here in the Bahamas and the cost,” he said.

Symonette said  he will reserve his comments on the IACHR’s review of immigration protocols until he speaks with Minister of State for legal affairs, Ellsworth Johnson.