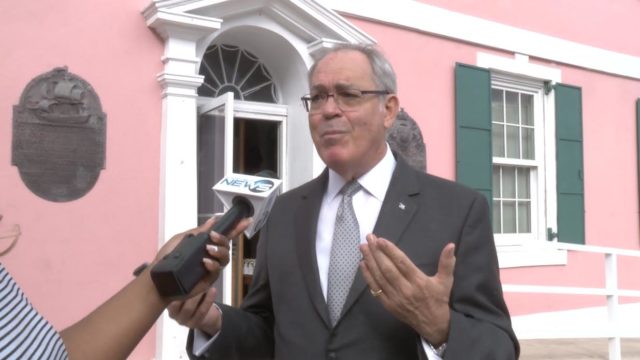 NASSAU, BAHAMAS – Brent Symonette, the Minister of Financial Services, Trade and Industry and Immigration on Monday refuted claims that he has shares in Bahamas Hot Mix Company Limited (BHM).

“They can attack me as much as they like. I had no input on whether or not that contract was issued or not,” Symonette told Eyewitness News yesterday.

Bahamas Hot Mix was recently awarded a $20 million contract to carry out rehabilitation work on the Lynden Pindling International Airport runway and taxiway, according to a statement released Sunday by Nassau Airport Development Company (NAD).

In a document obtained by Eyewitness News, eight members were listed to have involvement in the company, one of them being “the Symonette Group Ltd” and “the trustees of Brent Symonette’s  Children’s Trust.”

Opposition leader Philip Brave Davis as well as Englerston MP Glenys Hanna-Martin on Monday questioned the issuance of the contract, but Symonette stressed yesterday, “It’s my children or my children’s trust who are shareholders, not me and my individual name.

“Go back in history. My association with Bahamas Hot Mix has been in the newspaper for at least 20 years. Research your own files. I’m not a shareholder of Bahamas Hot Mix Company nor I’m I going to run away from the fact that my children’s trust was.

“The decision [to award the contract] was made by the Airport Authority, not the Cabinet of The Bahamas.”

Asked yesterday why his name was often linked to the Bahamas Hot Mix company, considering that he had addressed the issue on more than one occasion, Symonette said, “My name is Brent Symonette I’m guilty of everything, I’m the favorite whipping boy.”

In April 2019, NAD initiated a Request For Tenders (RFT) to six qualified companies (four international and two Bahamian firms) to submit bids for asphalt paving services for the project.

A total of four bids were received and submitted to the independent pavement consultant for evaluation including three international companies (United States, Canada and Costa Rica) and one Bahamian firm, NAD said in its statement issued on Sunday.

“After all of the bids were carefully evaluated, Golder recommended that the contract be awarded to Bahamian asphalt paving company Bahamas Hot Mix (BHM).

“Golder determined that the company submitted the most competitive bid and met all of the specifications required to complete the project in the most efficient, cost effective and timely manner.”

In addition, in 2009, BHM would have successfully remediated significant paving works on LPIA’s main runway (14/32) after its reconstruction from 2004-2006.