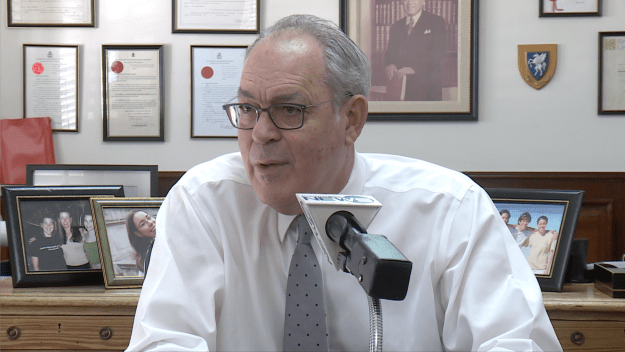 NASSAU, BAHAMAS – Former Cabinet Minister Brent Symonette insisted yesterday that the discussion between he and Prime Minister Dr. Hubert Minnis regarding the relocation of the General Post Office from East Hill Street to the Town Centre Mall were only preliminary and no final deal was made.

His latest comments come amid a cloud of controversy following his revelation two weeks ago on ZNS’ radio talk show “The Conversation” with host Shenique Miller that he had a phone conversation with the prime minister during which they discussed the deal.

There were concerns about the timeline of that discussion and whether it occurred before or after the matter was discussed and approved by Cabinet.

Responding to questions from Eyewitness News Online yesterday about when that conversation took place, Symonette said he could not recall exactly.

“I went to Mexico. I came back to The Bahamas. I then went to the United States in October. Now, when that happened (the discussion), I have to go back to by diary. I don’t recall. I never went to Mexico twice,” Symonette said.

According to a Bahamas Information Services (BIS) release at the time, Symonette travelled to Mexico with the Bahamas Financial Services Board to attend the Society of Trust and Estate Practitioners LATAM Conference 2018 from October 4-5, 2018.

“When the prime minister and I spoke, we spoke; no decision was made…; we did not not work out any details — we worked a parameter,” Symonette said.

“He (the prime minister) then took it from there. They had a Cabinet meeting when I was away. I was not a part of that and what happened after that happened.”

While labelling the talks as “preliminary”, when Symonette appeared on “The Conversation” he seemingly provided specific information about the deal including the rental amount.

“I figured there’s no way they are going to rent from my brother and myself, so I left it alone,” the former minister said on the radio talk show.

“The phone rang one morning in whenever; I was in Mexico.

“I said prime minister, I can deliver it by Christmas if it’s no Rolls Royce and we have to reduce the size of the building.

“We had that discussion.  I said you have to deal with the whole question of conflict of interest.

“He said we will do a resolution in the House of Assembly. He said, what will the rent be?

Yesterday, Symonette maintained that the discussion with the prime minister was above board.

“We had a preliminary discussion about the way forward; there was no decision taken okay, so when you guys try to impugn that the prime minister and I made a decision, that never happened,” he insisted.

Symonette noted that the comparison he made with the vehicles was as attempt to scaleback the initial proposed deal by the Progressive Liberal Party (PLP) to rent the Town Centre Mall.

“That’s the concern because the PLP had plans to do the post office,” he said.

“The plans were drawn by the PLP, that they left in place.

“…They claim everything else, claim this one.”

He alleged that Symonette participated in unauthorized disclosure as a minister of the Cabinet after taking an oath of allegiance swearing “not on any account, at any time whatsoever, disclose the counsel, advice, opinion or vote of any particular minister . . . except with the authority of the Cabinet and to such extent as may be required for the good management of the affairs of The Bahamas, directly or indirectly reveal the business of proceedings of the Cabinet or the nature or contents of any documents communicated to me as minister or any matter coming to my knowledge…”.

Sears described the matter as a crisis.

He recommended, among other things, that while these issues must be addressed there are also public policy measures which should be undertaken to restore public confidence immediately.

“Firstly, there should be the immediate debate and passage of the Integrity [Commission] Bill, with robust criminal sanctions for abuse of public office and the public goods of The Bahamas,” he said in a statement.

“Secondly, an independent Contractor General Office, with constitutional security of tenure and independence, should be established to superintend all public procurements.

“These measures can stem the rapidly eroding public trust in the government and better secure the Bahamian democracy.”

When pressed yesterday, Symonette said he had addressed that matter sufficiently, inclusive of all minutiae details, and he did not wish to discuss the matter any further.

“I don’t have anything further to say about it,” he said.

“We have been over this …forever and a day. I don’t know what else there is to add to the story.

“The main issue is we had a discussion; …we came back; there was a Cabinet discussion; it was debated in Parliament and we went on from there.”