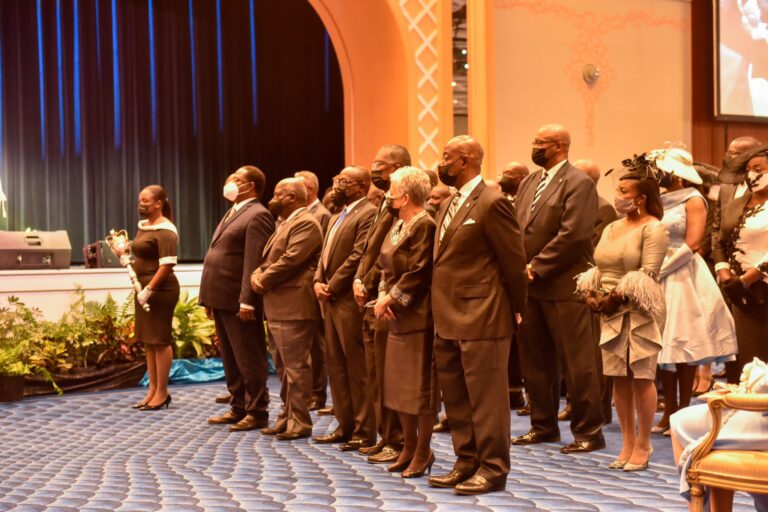 Thirty-nine parliamentarians sworn into the House of Assembly

Renovations of HOA expected to be completed by week’s end

NASSAU, BAHAMAS — More than 1,700 supporters, dignitaries, civil society stakeholders, religious leaders, parliamentarians, and other government officials attended yesterday’s Opening of Parliament at Baha Mar, as the Davis administration laid out its agenda for The Bahamas over the next five years, including plans to tackle the ongoing coronavirus pandemic, the economy, and the social safety net.

Attendees were socially distanced and seated, with 1,350 people in the Grand Ballroom and around 350 in the Andros Ballroom.

Among the 94 legislative and policy pledges made by the Davis administration in its Speech from the Throne delivered by Governor-General CA Smith, were plans to reduce the nation’s value-added tax from 12 percent to 10 percent; stabilize public finances and increase public revenue with a debt management plan; amend both the Procurement Act and Fiscal Responsibility Act; as well as plans to increase the minimum wage, pension for senior citizens, benefits for persons with disabilities; and tax incentives and concessions for domestic investors.

The government also pledged to amend the rules of the House of Assembly to enable “fixed sessions of Parliament”.

“These are the policies and plans upon which my Government will legislate in order to bring about a New Day in The Bahamas,” read Smith.

We look forward to working in partnership with the Bahamian people to bring about a healthier, wealthier, and wiser society.”

Parliament, including the Senate and House of Assembly, was held in Baha Mar’s convention center via a proclamation from the governor-general.

There were criticisms in some quarters as to the constitutionality of Parliament being held outside the city of Nassau.

Opposition Leader Dr Hubert Minnis accused the government of conducting an “unconstitutional excursion” to Baha Mar for the Throne proceedings, a claim Davis called typical of a man who lacks prudence and due diligence, which is synonymous with the way he led the country.

Addressing this during a press conference following the Speech from the Throne, Prime Minister Philip Brave Davis said: “It is typical of the manner in which the leader of the opposition, and as prime minister, how he conducted himself in the management of our affairs.

“Obviously, he knew a proclamation had to be issued.

“Now, if he knew that, don’t you think he ought to check to see whether one was issued before he made the claims that he made.

“Isn’t that the prudent thing to do.

“Well, he didn’t and again it speaks to the character and the motives of a man who still wishes to lead this country.”

In an interview with Eyewitness News, Baha Mar Senior Executive Vice President Robert ‘Sandy’ Sands said while he could not disclose the contractual agreement between the government and the resort, the arrangement was not a profit-making exercise.

“I am not going to discuss the contractual arrangements between ourselves and the government of The Bahamas, but I can assure you this was not a profit-making venture for Baha Mar,” he said.

Sands said Baha Mar was gratified to be chosen for the historical event.

The venue outside of Nassau was selected as the House of Assembly undergoes renovations.

Eyewitness News understands that those renovations could be completed by the end of the week.

When asked whether there was an arrangement to have future sessions of Parliament at Baha Mar with the infrastructure already in place, Sands said: “I cannot answer that question.”

The next session of Parliament is slated for next Wednesday.

Does this mean we can now go to church, bury our dead properly, celebrate the birth of Christ with family, etc???? I dont know too many Bahamians with more than 1700 people at church, funerals, or Christmas events…