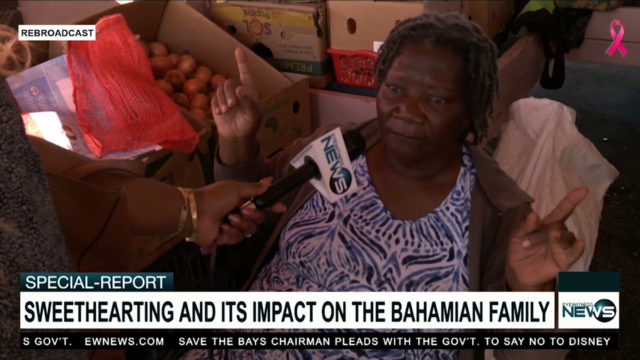 Sixty-five-year-old Judith Rolle married young, just six months before her 17th birthday. Her husband, several years her senior, initially provided for her and the six children they eventually had but according to Rolle, the relationship soured when she discovered that her husband was being unfaithful.

“My husband was a good husband to me,” Rolle said. “It took a turn for the worst when he started keeping sweetheart other women and I soon became like poison in his eyes.”

Now divorced, Rolle said she knows first-hand how “sweet-hearting” – which is the term used locally for someone who is having an extramarital affair – has become culturally acceptable in The Bahamas and destroys the family unit.

“After I found out he was keeping other women, that gave him all of the freedom,” she said. “I had to deal with it until I could do better, but it was not something that I agreed with.”

Rolle lamented that her children watched her deal with the situation and it was something that she regretted.

“I had to find a way out,” she said. “It pained me to know that my children knew what was going on and they may have seen me as a weak individual not being able to deal with it.”

Bishop Walter Hanchell of Great Commission Ministries, who offers family counselling said he had witnessed those who are participating in infidelity become less discreet with their actions.

“Back in the day, these things were done in secret, but today they are so bold,” he said.

“The sweetheart wants to have a public family and some of the women even are comfortable in approaching married men and it is wrong.”

Hanchell argued that sweet-hearting has led to a bigger issue of children born out of wedlock, which has had its own repercussions and contributed to many social ills.

Others we spoke to on the issue noted that the so-called “Bahamian pastime” has also destroyed families.

According to data obtained from the Bahamas Department of Statistics released last year, the lowest divorce rate in The Bahamas from 1975 to 2005 was in the year 1975.  It was 0.5 per 1000 population.

The divorce rate then jumped in 30 years to 2.1 in 2005.  There were only 99 divorces in 1975 as compared to 689 in 2005, thirty years later. It should be noted that the total number of marriages up until 1998 included residential and tourist marriages. It was not until 1998 when the department separated the figures. The marriage rate was at its lowest in 2005.

By law one can petition for a divorce on the grounds of adultery, cruelty, desertion for two years, separation for five years, homosexuality or bestiality.

For Rolle, the choice to divorce her husband was one of the best decisions she made.

“For those who can forgive and forget and deal with it and work things out… that’s great,” she said. “For me, it was just not something I could not live with.”

Rolle said she had to move on with a broken home and a broken heart.

Genea can be contacted at gferguson@ewnews.com.