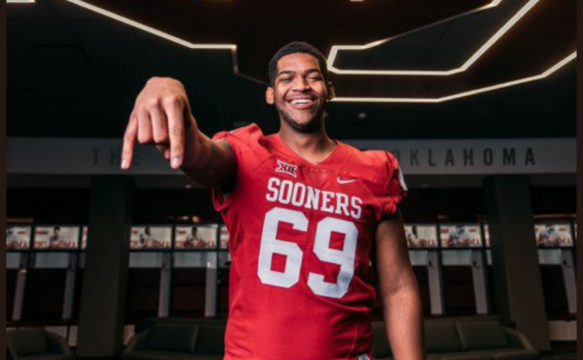 David Swaby will be taking his talents to a higher level in the fall as the 6’9” offensive tackle yesterday announced his commitment to attend the University of Oklahoma (OU).

Swaby, who moved to the United States to play American football in high school said, he was shocked he had to take the junior college route in order to make it to National Collegiate Athletic Association (NCAA) Division I.

He spent his high school years between St. Thomas Aquinas in Florida and Salesian High School in Los Angeles for his senior year. He originally signed to play collegiate football at New Mexico under coach Bob Davie, however, he was ruled academically ineligible.

“Initially, I didn’t see myself as a JUCO guy,” Swaby said on signing day.

“This wasn’t supposed to be how it went. But after talking with my parents, and particularly my sister, I chose to embrace the opportunity I still had in front of me and give JUCO a shot.

“I realized that life happens, and I wasn’t going to run from my mistakes. Rather, I was going to attack them and move forward with my goals and dreams, and JUCO was the only option I had to do that.”

Swaby said that Oklahoma coach Lincoln Riley made him feel at home on the visit, and that he felt the Sooners coaching staff could help him reach his peak potential as a player.

“Coach really made me feel incredible on a personal level,” Swaby said.

“He knew about my story and my journey, and he kept saying how much he admired the path I have been down and how he has noticed my progress along the way. He was very aware of my story – both on and off the field -which was just really incredible to hear and a very humbling feeling.”