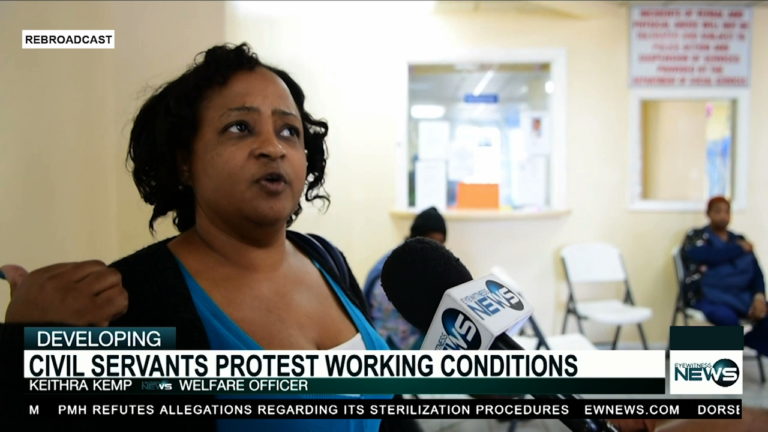 NASSAU, BAHAMAS – Almost a dozen social workers employed at the Department of Social Services, housed at the National Insurance Building on Wulff Road, left their posts on Tuesday, fed-up with the poor working conditions that they claim is affecting their health.

According to the irate employees, the building is reportedly infested with mould and rodents.

When Eyewitness News Online visited the Department yesterday, there was suspected mould in every corner of the building; on the walls, chairs, and even on some of the staff’s clothing.

Yesterday, social workers said they have reached their breaking point and enough is enough.

“This morning when I walked in, a roach jumped at me,” exclaimed Keithra Kemp, a welfare officer at the Department of Social Services.

“Yesterday, I was on the phone and a roach crawled out of the phone. I pulled out my desk drawer and another roach came out to greet me.

My co-workers have been doing the African dance because rats are all over the place.”

Laurence Strachan, a case aid worker at the Department of Social Services said rodents are everywhere in the building and something must be done to address the situation.

“When is someone going to do something,” Strachan asked. “What do we have to do to show that we are concerned about ourselves and our children?”

Other staff members said that the reported mould infestation on some chairs in office is so grave, that they have to resort to sitting on phonebooks or their sweaters. Nonetheless, employees said this is not sufficient.

“When we called head office earlier this morning, they told us to spray Baygon [on the rodents] Strachan claimed.

“We sprayed the Baygon and all of our clients began coughing.

Workers also claimed that they have had recurring illnesses due to the alleged mould infestation and fear that any illness that they contract at work would be passed on to their loved ones.

According to social services staff, a meeting was held last September with Minister of Social Services, Frankie Campbell, but they said he has been ‘missing in action’ since then. Furthermore, they claimed that they were told by ministry officials to just handle the situation themselves.

“I’ve been off over and over again with the same thing from the mould infestation,” Kemp claimed. “After the meeting back in September with the minister, nothing has happened.

Director of Social Services, Lillian Quant, told Eyewitness News Online that after conducting her assessment of the workspace, she is very concerned about staff and the welfare of clients who visit the Department of Social Services.

“What we have put in place is to accommodate staff at our headquarters, which is located in Sunshine Plaza, Building A.”

Employees are appealing to the government to swiftly tackle the mould and rodent issue as it has reportedly progressed and their health is at risk.