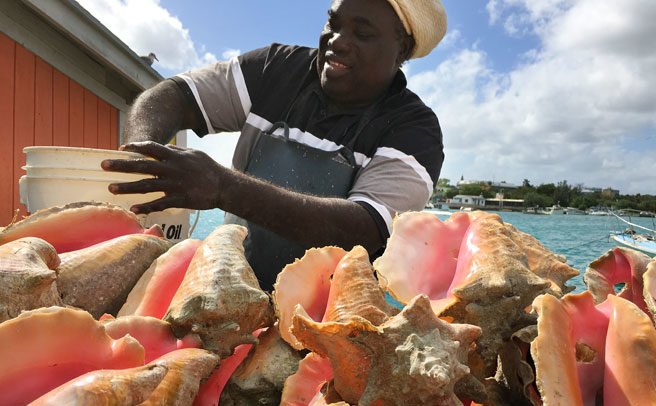 NASSAU, BAHAMAS — In a recent survey conducted by Bahamian market and opinion research firm Public Domain and obtained by Eyewitness News, more than 85 percent of respondents support the idea of a closed season for conch.

There was widespread public debate about conch sustainability and its protection in January following a study that found The Bahamas could lose its conch industry in 10 to 15 years if action was not taken to reduce pressure on the food source.

Chicago’s Shedd Aquarium, along with the group Community Conch, measured more than 3,000 conch at 42 survey sites throughout The Bahamas over an eight-year period (2009-2017).

The survey, published in the scientific journal “Reviews in Fisheries and Science and Aquaculture”, determined that the density of mature conch was far below the established minimum threshold for reproductive success, except in remote areas.

It was commissioned by Community Conch, with the lead authors being Community Conch scientists and data between 2016 and 2017 being provided by Dr Andy Kough of Chicago’s Shedd Aquarium.

The scientists recommended The Bahamas establish a size limit for legal harvesting based on a 15-millimeter shell lip thickness, enforce the landing and trade of conch in the shell to improve enforcement and end the export of queen conch from The Bahamas.

The government has said it is prepared to discuss the possibility of a closed season for conch with stakeholders.

Public Domain conducted telephone interviews between May 26 and June 23, 2015.

One-thousand and one respondents throughout The Bahamas were interviewed – 729 in New Providence, 171 in Grand Bahama, 31 in Abaco and a combined 70 from 13 Family Islands, including Acklins, Crooked and Ragged Islands, Andros, Bimini, among others.

Of the respondents who were asked what their level of support was for a closure to conch fishery during mating season, 75.9 percent said they strongly favored a closed season.

Another 9.5 percent said they somewhat favoured it, while four percent were neutral.

Just 3.3 percent of respondents said they were somewhat opposed to a closed season for conch, while 6.4 percent strongly opposed.

Less than one percent said they did not know.

Respondents were also asked about the level of support or opposition for the government to take action to manage the conch industry, including revising the current fisheries laws to restrict the harvest of juvenile conch so that mature conch are defined by a specific measure of lip thickness.

In Abaco, 94.2 percent of respondents either strongly favoured or somewhat favoured.

Additionally, more than 95 percent of respondents either strongly agreed or agreed that the government needs to take action in order to protect the conch and conch fishery.

Among the first few questions respondents were asked was whether they believed conch was an infinite resource, of which, a combined 67 percent of participants either disagreed of strongly disagreed.

Just over 10 percent strongly agreed with the statement, while another 12.4 percent agreed for a combined 22.4 percent.

Approximately four percent responded that they neither agreed or disagreed to the question.

The overall view that conch was not an infinite food source was similarly reflected in Grand Bahama.

Among the other islands, particularly Abaco, however, there was more support of the idea that conch is an infinite resource.

Twenty-seven percent of respondents in Abaco strongly agreed and 8.6 percent agreed, for a combined total of 35.6 percent.

However, 55.8 percent of respondents in Abaco either strongly disagreed or disagreed that the food source was infinitely available.

There was also overwhelming support of conch being an important part of being Bahamian, and its protection being a part of protecting and preserving the Bahamian way of life.