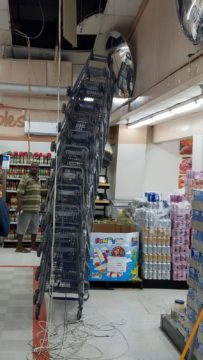 NASSAU, BAHAMAS – Police are investigating a break-in at a major food store located on Baillou Hill Road and Poinciana Avenue.

But what made this robbery so different is that the bandits built a tower of escape with grocery shopping carts.

The clever thieves stacked at little over one dozen trollies to the roof of the store to make their escape.

Authorities said once officers assessed the store, they discovered that the culprits had cut a hole in the roof.

Police said the bandits lowered themselves through the hole with a rope and subsequently escaped on the tower of supermarket trollies.

Eyewitness News Online reached out to Super Value’s CEO Rupert Roberts Thursday afternoon but he was unable to provide comment as he is presently off island.

Baillou Hill Road store managers also refused to provide comment on the incident when pressed on the matter.

It is still unknown what was stolen at this time.

Police have no one in custody in connection with the incident.