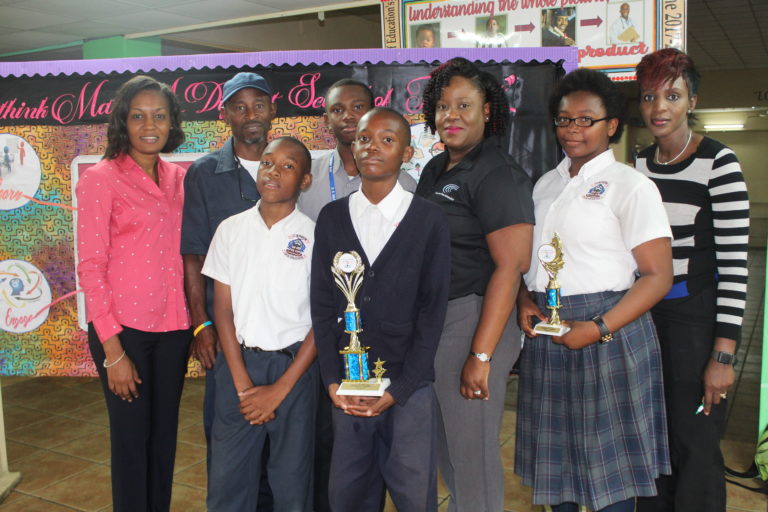 Winners recently received their awards at a ceremony held at the school’s auditorium. Taking home the first place trophy was C.H. Reeves, followed by A.F. Adderley in second place and S.C. McPherson in third.

The competition, sponsored by Consolidated Water (Bahamas) Ltd. (CWCO), is the brainchild of S.C. McPherson mathematics teacher and Teacher of the Year Tiffany Daxon.

“I realized that every year they have language competitions, but math was never recognized,” said Daxon.

“So, I decided to start something that would showcase the mathematics talent that students have.”

All junior high schools throughout New Providence and the Family Islands are invited to compete in a game of “Math Jeopardy” at the school’s auditorium.

“It’s exciting being on the team and it gets pretty intense when other players try to intimidate you,” said 12-year-old Torian Carey.

“Before the match, we gave the competitors a heads up on what to expect, and they gave us a little smack talk. So we were like, ‘Okay, we’re in a competition!’”

Thirteen-year-old Asaph Ruinolds participated in the math competition for the first time this year.

“It felt exhilarating. Math is my favourite subject, and I would love to be in the competition next year,” said Ruinolds.

“We always hope to place first, but we’re proud that our students entered the final at the top,” according toSC McPherson math teacher Phoebe McFall.

“And when other children see their friends showcase their talents and skills, it gives them something to aim for.”

“As the sole sponsor, CWCO’s partnership is an excellent one and much needed. We want to get more sponsors so we can have the competition someplace more schools can fit, because we can only accommodate a certain amount of students. That’s our goal,” said Daxon.

CWCO Accounts Manager Welliya Cargill said, the company is proud of what the school is doing to recognize their students’ skills and cultivate an interest in math.

“The Bahamas is full of bright young minds that excel in many different subject areas, and we believe that all of them should be encouraged,” said Cargill.

“We congratulate S.C. McPherson on another successful competition this year.”