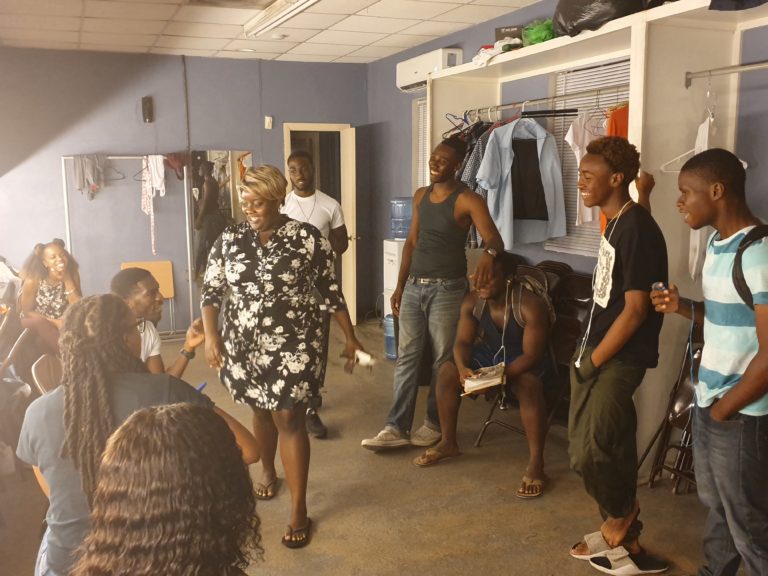 The talented cast of the Struggles and Dreams stage play are seen here having a light moment backstage as they prepare to rehearse for the successful play that debuted over the weekend. Photo by Marechan Burrows.

NASSAU, BAHAMAS – Former U.S. Secretary of State, Colin Powell once said “A dream doesn’t become reality through magic; it takes sweat, determination and hard work.” In other words, to truly achieve something great is to dream; but to dream is to struggle.

This is the level of truth playwright and director Jonico Pratt attempts to portray in his first stage play, “Struggles and Dreams,”which debuted at the Dundas Center for the Performing Arts last Friday July 5thand on Saturday July 6.

The story itself follows a young Bahamian man, Craig, whose dreams are too big for his environment.

Craig wants to produce an album and he wants to help his single mother and little brother out in a hurting economy, but he can’t seem to find the means to.

This sense of desperation lands him in hot water with only faith and common sense to guide him.

Pratt, an upcoming director and writer in Bahamian theatre, modeled the play to represent the events he experienced in his life.

He wanted to portray what life was like for many young Bahamians, but in a platform where the audience was also able to leave the theatre more cognizant of their society.

“I could relate to a whole lot of this,” Pratt explained. “Me and my family went through a lot; current being off for months and all you had to hold on to was dreams.”

But to produce such a moving relatable play like“Struggles and Dreams,” one must master their craft. That is, the screenplay itself.

“I would pick up the pen and put it down for like a month,” Pratt said in reference to the length of time it took him to complete the screenplay. “So, I would say like seven months.”

And that is just the beginning.

Casting is another issue when it comes to portraying the message of the play accurately to its audience.

“I wanted to find a young Bahamian to represent all the young Bahamians out there,” Pratt noted. “To let them know that no matter your struggle, you just hold on to that little light and try to let that shine. There’s light at the end of the tunnel.”

To represent the desperation and dreams of young Bahamian people, Kentario Mackenzie played the role of Craig, a character he claimed felt natural for him to play.

“It wasn’t [a hard character to play] because my personal life is so synonymous [with Craig]. Overall, Craig was so natural to play. And of course, having a director like Jonico made it so easy to play that role because he was always that helping hand.”

But most importantly, Craig is a universal character. He is the underdog of the story and he is perfectly executed by the director to create a sense of empathy among viewers.

“I feel like Craig beat the odds,” Mackenzie said. “And people wouldn’t have expected it from him. That sheds light on the people who are just like him in our community who defy all of the expectations people put on them. So, I think it’s a very impactful story.”

But the dilemma Craig faces is brought to him by the play’s antagonist who represents a real-life struggle that young Bahamians face. Juan Pratt, the biological brother of the director, plays Kaio, the main foe in the play. But even though he is related to the director, he said nepotism did not work in his favor.

“I had to audition for it,” Pratt said, chuckling on the experience. “But he didn’t like me. He almost fired me, actually. I was hurt. But he came to me and said I could audition for another role, which is Kaio, and I did. So, I was very happy to get this role. He really trusted me to play Kaio and he gave me the freedom to interpret how I received Kaio.”

And of course, to really add a sense of true authenticity of the play, a strong Bahamian mother is needed to be a voice of reasoning and a guide for her children through thick and thin.

Valene Rolle, co-director and assistant stage manager of the play, executed the role of Craig’s mother, Natasha, for the viewers to relate to. Her performance is captivating, especially when realizing that she took on the role a little under three weeks before performance night. But having a passion for drama, Rolle embodied the character of Natasha and used her to speak volumes about the power parents have in creating a better life for their children.

“Natasha is like a lot of single mothers that exist in The Bahamas,” Rolle explained. “You really want the best for your children, you don’t want them to go through what you’ve had to. But just the vicissitudes that life brings to the table, you don’t know what to do when they come. So, you fight and give your all and pray for the best.”

But Natasha’s character also targets the societal issue of leaving single mothers to the wind, according to Rolle. Many people within Natasha’s neighborhood do not help her, but instead, find pleasure gossiping about her. Something Rolle says represents the struggle single Bahamian mothers encounter within society.

“I focus on the societal issue of you giving your all, but the community is right there having the most to say with no contribution whatsoever. There’s a lot of talk, but nobody’s actually helping. So, it speaks to people in the struggle and it’s a big comment to society at large- are you part of the problem or part of the solution?”

With recent horrific events, like the mass shooting in Montel Heights, the play’s message targets the issues of peer pressure, gun violence and hopelessness. Each character was executed powerfully, giving viewers someone they could relate them to. The storyline created suspense, not feeling like a cliché youth rebellion story.

The play, funded mostly by Pratt’s company (Bright Light productions), offers a commentary on Bahamian society and tells young people that anything is possible, once they are willing to struggle before they achieve their dream.