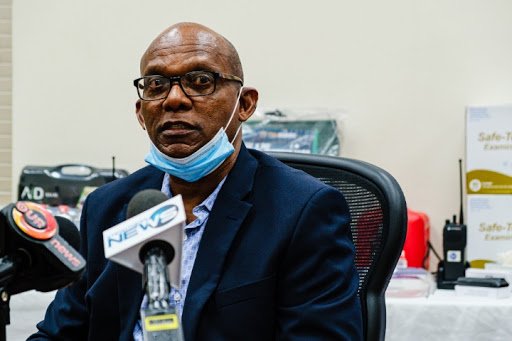 Smith was responding to a question on the lack of designated shelters that are constructed specifically for hurricane use, during a press conference to update the public on a potential tropical storm in the Atlantic.

The concern was raised by the International Organization of Migration in a May report.

To this, the permanent secretary said undocumented migrants, particularly those who reside in unregulated communities that pose health risks, should return home as there are insufficient resources for them.

Smith said when the hurricane season approaches and questions are asked about what NEMA is doing, “we need to check ourselves”.

“What are we doing about it because I constantly say, NEMA is all of us and we must face the reality,” he said.

“Something has to happen. All of that said, we do our best to accommodate all persons, who are here in The Bahamas, but we are realistic people. There is only so much we can do.

“There is only so far our resources can go. So, as I reiterate, part of the preparation needs to be, when the circumstances permit, those who are not here legally, and particularly constructing facilities that are very compromised; that will not withstand systems that will come during a hurricane season, that they return home.

“We welcome everybody to The Bahamas. We know we need assistance, but we also know the reality — there is only so much we can do with the resources we have.”

The International Organization of Migration (IOM) released its assessment of Abaco and Grand Bahama in May, warning there was insufficient shelter capacity for another storm on the two Dorian-ravaged islands.

The IOM furthered these islands were underprepared for this year’s hurricane season.

The report also expressed concern about the lack of designated shelters constructed for that purpose, particularly in Abaco, where shantytown communities were wiped out.

Smith said he was familiar with the report.

He said it was a reminder of “what we know of”.

However, Smith said The Bahamas is seeking to build designated shelters and there have been financial contributions from other governments and entities to assist with this effort.

National Emergency Management Agency (NEMA) Director Captain Stephen Russell has advised that all shelters in the southeast Bahamas will be be opened by tomorrow morning.

A tropical storm warning for the southeast Bahamas may be issued later today.

Social Services Director Lilian Quant-Forbes assured that social distancing protocols will be followed in the shelters, noting that classrooms serving as shelters will house less people.

Responding to a question about the lack of designated shelters and the use of schools, Smith said: “We have a situation in The Bahamas where we have a number of migrants, who live in conditions that cannot withstand systems such as hurricanes.

“We saw that with Hurricane Dorian and the consequential disaster that followed.

“We have to come to the place and realize that, that situation has to be addressed.”

He continued: “I said previously the International Organization for Migration focus is on providing housing for migrants, so when they make their report and speak to the lack of accommodations to house persons in The Bahamas to protect them from storms, they have build into their consideration, the countless number of migrants that are in The Bahamas.

“And part of our preparation needs to be that if you are in The Bahamas illegally, you should make every effort to go home.

Smith said The Bahamas is a humane society.

“We provide water and food and shelter, but there is only so much that we can do,” he continued.

“That is the reality. We need not try to escape that reality. And just as we’ve had an illegal migrant population in the heart of Marsh Harbour, Abaco, that resulted in quite a number of lives being lost, we have such communities in New Providence; in Eleuthera; in Andros; and many of our own people are facilitating them being here under those conditions.”