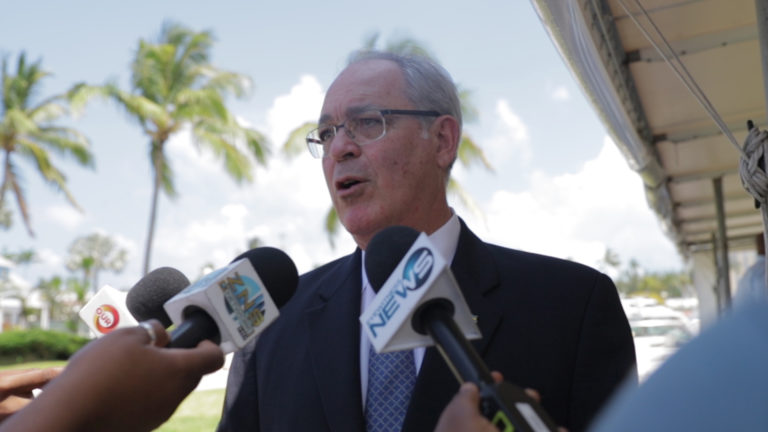 Immigration Minister Brent Symonette said Thursday that his department will continue to clamp down on illegal migrants living and working in The Bahamas, despite the noise in the market.

In an interview with reporters yesterday, Symonette said, the Immigration Department is focusing on stopping illegal migrants before they come into the country as well as processing documents faster.

“We have an Immigration Commission and they are meeting as we speak,” he said.

“We got some Cubans the other day and there were some 187 Haitian nationals and yes, we are proceeding with what we have been doing regardless of the noise. We also have new legislation coming forward. You might have noticed the other day someone was charged with harboring illegal immigrants. So, we are going to increase the fees subject to Cabinet approval.”

Last month, just 24-hours after they were apprehended off the coast of Eleuthera, 89 Haitian migrants were charged before the Eleuthera courts with violation of the Immigration Act, according to a press statement by the Royal Bahamas Defence Force (RBDF).

The 64 males and 14 females were charged with illegal landing. Eleven children were also a part of the group. RBDF reports say all the migrants pleaded guilty, were sentenced to conditional deportation and deported via Bahamasair jet services.

RBDF reported that the first incident saw the capture of nearly 100 migrants, just over 20 miles south east of Great Inagua.

The sloop, the defence force said, was spotted by an Operation Bahamas Turks and Caicos (OPBAT) helicopter patrolling the southern Bahamas.

The second group of migrants, officers said, were also sighted by an OPBAT helicopter east of Inagua. Nearly 100 migrants were estimated to be on board that sloop. The United States Coast Guard was said to have assisted with the apprehension of that vessel.

In the latest incident, defence force officers arrested 70 illegal migrants, moments after they landed on Lantern Head Point, near the southeast cost of Great Inagua.