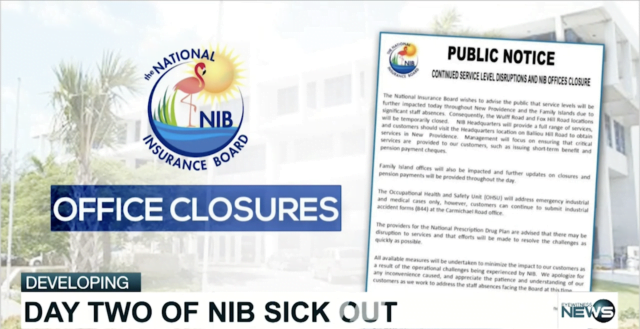 NASSAU, BAHAMAS – Management at the National Insurance Board (NIB) on Thursday joined the line staff in a mass sickout exercise, forcing the closure of several NIB branches across the country.

It was the second day staff had called in sick after negotiations on a new industrial agreement reached an impasse.

Marvin Duncombe, president of the Union of Public Officers, told Eyewitness News on Thursday that he is hopeful his members would have recovered by today.

“The nature of our illness continuesto be the same and we are hoping we can feel better soon,” Duncombe said. “But what is interesting is our managers are also ill and they have called in sick today, but we intend to continue to push on until our people get justice in this regard.”

In a statement released Thursday, NIB said Wulff Road and Fox Hill locations will be temporarily closed and customers should visit the headquarters on Balliou Hill Road for services.

NIB said all measures are being undertaken to minimize the impact to customers as the Board works to address staff absences.

Meanwhile, Minister of Public Service Brensil Rolle, who has responsibility for the National Insurance Board, said he is disappointed that the union decided to take action.

“The union has been negotiating with NIB for more than a month, and as far as I know, there has only been one obstacle, an issue over a lump sum payment,” Rolle said.

“My position has been clear [and] since they have been negotiating they were happy as far as I know. I think the judgement to take action after you come across your first obstacle is something that is challenging to me.”

Meanwhile, Duncombe said he spoke with Rolle on Tuesday night and was assured the concerns raised would be reviewed.

He also said a meeting between the union’s representatives and Smith could not be facilitated yesterday because members were sick, but he believes that they will feel well enough today to attend.