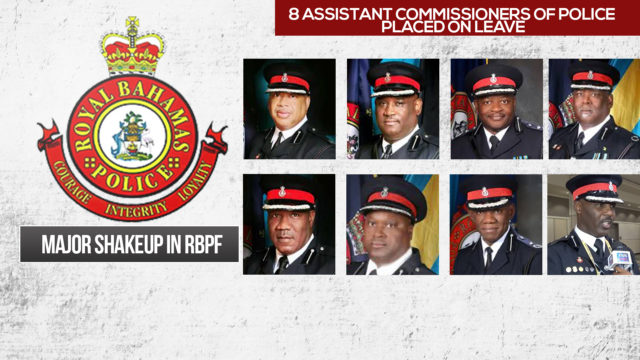 NASSAU, BAHAMAS – The decision to place an additional five senior police officers on leave was part of the transformation of the Royal Bahamas Police Force as the government seeks to bring the system in line with “where it ought to be”, according to Minister of National Security Marvin Dames, who said he met with executive teams of the police force and Royal Bahamas Defence Force on Wednesday.

A letter from the commissioner of police to the senior officers, obtained by Eyewitness News, read: “I would like to inform you that your accumulated vacation leave has been accumulated to ‘x’ weeks. You are therefore required to enjoy all leave which you should commence on March 25, and will end on ‘x date’. I look forward to seeing you upon completion of your leave. If you have any questions or concerns please do not hesitate to contact the office of the commissioner.”

Speaking to reporters at Police headquarters on East Street, Dames said during both meetings on Wednesday, vacation was discussed as there were scores of officers throughout the ranks who have accumulated significant amounts of vacation — in some cases as much as two years.

“This is something that we have allowed, and not we, but successive governments have allowed to run amuck for many years because I could recall when I was on the police force, I was one of the officers as well,” he said.

“What the service is finding out is that a number of these persons, as they move closer to retirement, that there is so much leave, it exceeds the period.

“So, as a government, we have taken a position now where we are holding police and defence force officers, corrections officers, but the fact is that we find in law enforcement the problem is greater.

“We are trying to ring everything back in line.

“Now, there are some persons leave who will run into retirement, but they understand that.”

According to section 94 of the Police Act, every police officer shall upon becoming the age of 60 or after giving 40 years of service, whichever is earlier, shall retire from the police force.

An assistant commissioner may be asked at anytime after 55 to retire by the governor general, on the recommendation of the prime minister after consultation with the police commissioner.

Fernander and Greenslade have served on the force for 37 years; Cunningham and Deleveaux for 35; and Strachan for 34.

According to the minister, law enforcement agencies, among other government departments are constantly in transition and there must be an equal and consistent effort to ensure regulations are followed.

He said the government must also work toward moving these agencies and departments to a “place where we can say there is succession planning, there is training and there is development”.

Dames said while there were some who have sought to paint a picture of something sinister, the government is seeking to bring the system in line with “where it ought to be”.

“We look at these things as being a shock alright, but this is all a part of the transformation,” he said.

“We have to come to that appreciate. We have to have to do a better job too as a government to prepare our officers for leave, transition right because that is an obligation.

“We discussed that as well in the meeting. I don’t want to turn this into a personal interview.”

“This is an attempt to eliminate all PLPs from the public service,” Mitchell said in a statement.

“The FNM’s actions are wicked and evil and are condemned.”

However, Dames said, “These agencies are bigger than any one individual. You said five, but there will be more.

“The commissioner will obviously decide, but there will be more.

“There is not only the police force but the defense force.”

Responding to concerns that the latest move of the senior officers, who have charge of major components of the force, could stifle the organization, the minister repeated that the force is “bigger than any one individual.

“We need to get more in this place of where we empower people; where we develop people so if we are not there, somebody else takes over,” Dames said.

“We met these agencies here. We are going to leave them here as well.

“The test is in what condition we leave them in when we move off the scene.”

He also dismissed concerns that the move could impact moral.

“Morale has not been stronger,” the minister added.