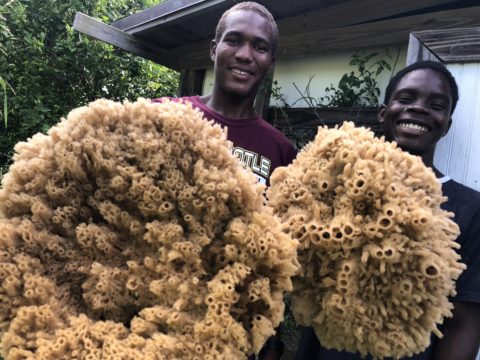 wo young men on Abaco show off two of the sponges on that island. On that island the sponging industry is making a comeback. “We have planted seeds in most of the islands where sponging happens and equipped spongers with the expertise to bring this industry back,” said BAIC Sr. Deputy General Manager Debbie Strachan.

The IDB-sponsored and BAIC-executed project to revitalize the sponging industry in the Bahamas now moves into the full implementation phase with spongers throughout the country energized to rejuvenate the lucrative industry.

“We have planted seeds in most of the islands where sponging happens and equipped spongers with the expertise to bring this industry back,” said BAIC Sr. Deputy General Manager Debbie Strachan.

“Andros now has a processing plant and we have met with spongers on Andros, Long Island, Abaco and other islands to pledge our support.”

The project to revitalize the industry is sponsored by the Inter-American Development Bank and The Bahamas Government and managed by BAIC along with support from IICA (Inter-American Institute for Cooperation on Agriculture), The Bahamas National Trust, The Department of Marine Resources and BCSA board members.

On Long Island, project manager met with spongers who said they were interested in not only forming their own association to guide the industry but also taking advantage of training opportunities.

When project managers met on Abaco the spongers there expressed some of their concerns including supply chain issues but were ready to move forward with making sponging a high priority.

“On Abaco, those spongers said they didn’t want to get stuck with a shed full of sponge with no supplier,” Strachan added.

“With us having the processing plant and the expertise in Mangrove Cay Andros solves that problem for them and the rest of the spongers concerned about this problem.”

The project with a $1.1 million price tag was designed to increase income for spongers by providing them with a larger share of the revenue from this industry.  A major component of the project is the formation of the Bahamas Commercial Spongers Association to centralize the processing of the sponge and help to link local spongers with international markets directly. One aspect of increasing local revenue for local spongers was adding value for the spongers on the front line on the various islands.

“Having that processing plant in Andros solves that problem as well,” Strachan added. “Spongers not only get to have their sponge processed there but also can add even more value by packaging for final sale.  This cuts out all of the middlemen and get the full value to the spongers.”

According to The Inter-American Development Bank project documents, the project hopes to empower local spongers who “do not have access to higher-value markets because they are not organized and do not have the skills to process and market the sponges, and thus earn a low-income”.

Many spongers harvest the sponge and sell it at a low price not realizing the full economic value of their work. Therefore, through additional education and increased sustainable harvesting practices, spongers through the country should see their incomes increased.