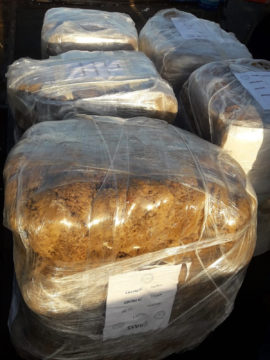 Monday April 15 was an historic, monumental day in Mangrove Cay Andros, for the Bahamas Commercial Sponge Association (BCSA), Bahamas Agricultural & Industrial Corporation (BAIC) and the Interamerican Development Bank (IDB) as the first shipment of Bahamian harvested sponges from the area began its journey to Europe.

The project to revitalize the industry is sponsored by the Inter-American Development Bank and the Bahamas Government, and managed by BAIC along with support from IICA (Inter-American Institute for Cooperation on Agriculture), The Bahamas National Trust, the Department of Marine Resources and BCSA board members.

Mr. Randy Thompson, President of the Association indicates that this sale to Europe has given much hope and encouragement to Mangrovians as their hard work is paying off.  Mr. Thompson continued stating that as President of the BCSA he feels confident and excited for the sponging industry at this point. He mentioned that after putting together their first order, shows that hard work and persistence pays off.  As a result of the work in Mangrove Cay, we can say that revitalization of the industry in The Bahamas is taking place.He continued lamenting that the BCSA and the community of Mangrove Cay, thank the Board and management of BAIC along with the collaborating partners for seeing the project to this point.

One of the aims of the project is to empower local spongers through training, teaching sustainable harvesting practices as well as access to higher-value markets therefore increasing the value of their product .

BAIC officials indicate that they have seen an increase in sponging on the islands of Long island, Abaco, and Acklins specifically. Bahamians were not aware that sponging was a viable industry in the country and the project has been able to encourage persons who may have lost interest in the industry to return.From all reports, there are indications that persons are returning, to their islands to involve themselves in sponging; this Is good for the expansion of the industry.

As a result of the project, spongers in Mangrove Cay have transitioned from manual processing to mechanized processes.  Which is important in meeting international standards, reducing labor costs and improving productivity. BAIC states that spongers are slowly moving up the value chain.

With a 1700 sq. feet sponging processing centre and state of the art equipment in in Little Harbour, Mangrove Cay, The community and the industry is excited about the way forward.