NASSAU, BAHAMAS — Speaker of the House of Assembly Halson Moultrie said yesterday he has turned over the keys of the Office of the Speaker to the chief clerk of the House.

In an interview with Eyewitness News, Moultrie said Minister of Public Works Desmond Bannister has been assured him an office will be renovated on the ground floor of the Senate building to accommodate a new speaker’s office along with other offices for the staff of the Parliament, though he was not provided a timeline.

“I had initiated this process of renovating the existing speaker’s office from some time in October 2017,” Moultrie told Eyewitness News.

He maintained Parliament has long planned to expand its services to focus on strengthening the institutions of democracy but has been limited by the existing “cramped space”.

“I had numerous correspondence, quotes, architectural drawings dating back to 2017, but we have not been able to move with that project; with either one of them, the renovation of the speaker’s office or the ground floor renovations of the Senate ground floor.

“And so, I felt that three years was sufficient time, particularly when I examine the conditions of the speaker’s office. It’s really a health hazard.”

He said notwithstanding assurance of the minister, whom he has confidence in, “there is no timeline given for the renovations for the ground floor of the Senate building, so I have decided not to return to the speaker’s office… and I have turned over the keys to the clerk of Parliament”.

In Parliament on October 21, Moultrie said he will not use the existing office in its current condition after October 31 and would turn over the keys. 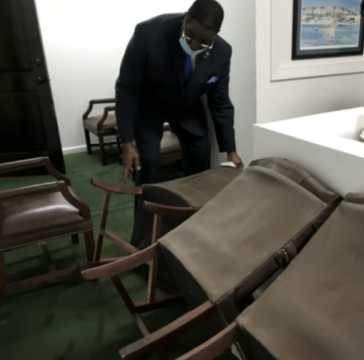 At the time, the speaker reiterated the need for the separation of powers and said he will “fight for the right of the legislative branch’s independence and autonomy”.

He also said he had no intention of resigning and if the majority desired, Parliament could be prorogued and a vote of no confidence could be brought against him to remove him.

The Office of the Speaker is located in a shared building on Parliament Street.

It has no bathroom, no running water, mold, and a leaking roof.

According to the speaker, the police force has also deemed the office a security risk.