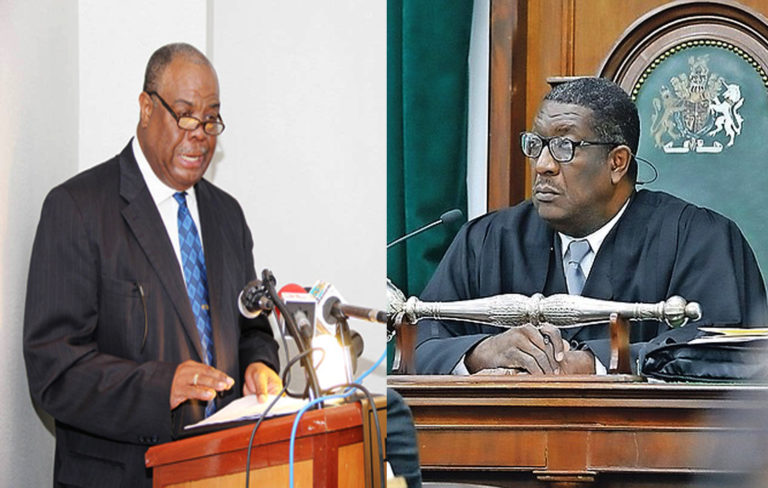 From left: Maurice Tynes and Speaker of the House, Halson Moultrie.

Moultrie was responding to a Letter to the Editor authored by Tynes, who publicly voiced his disdain with the Speaker’s suspension of Englerston MP, Glenys Hanna Martin, and comments made by the Speaker about his “mistrust” of the staff of Parliament.

Defending his position, the Speaker said that nothing can be further from the truth.

“The retired clerk seems to be having difficulty dealing with his retirement and staying out of the affairs of this Parliament,” Moultrie said. “He showed his true colours and provided the needed evidence to justify my statements and, in the process, vindicated the position that trust is earned.

“Under the guise of concern for the staff of this institution, the retired clerk, in an apparently politically motivated side attack, has justified my statements. New news is what the doctor ordered to clean up the puss and oozing wounds brought about by contaminated thinking.”

Moultrie added that he used to be under the impression that the former clerk was a friend.

“I remember when I was in third-party politics the clerk would call me all the time with material to attack the Ingraham Administration,” Moultrie explained. “His advice almost caused the former prime minister to sue me. …It appears that he was only trying to help the PLP as he is doing today. …Thank you Mr. Retired Clerk. My your soul rest in peace.”

Eyewitness News reached out to Tynes, who is not deceased, for comment. He said that he plans to review the Hansard, the House’s official record before he responds.

The PLP leader, he said, has resulted to “gutter politics” and cried shame on the member. Moultrie defended his character noting his 30 plus years of marriage to an “indigenous” Bahamian woman and added that he was no “soft powder puff man” looking to steal headlines.