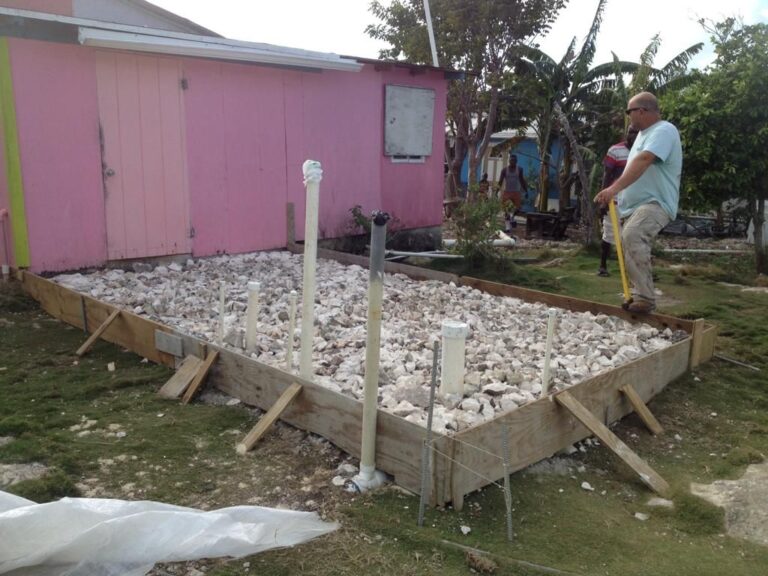 Foundation laid for housing structure in the Blackwoods community of north Eleuthera.

NASSAU, BAHAMAS — The ban on building structures on Spanish Wells commonage land in Blackwoods appears to be working, according to President of the Commonage Land Committee Ivanhoe Sweeting.

For now, Sweeting said they are hopeful about the newly established government committee but they may be led to take matters into their own hands if the issue is not resolved within a reasonable timeframe.

“As of right now as far as we know, yes it has been working, we haven’t seen any new structures erected since we’ve put the ban in place,” he said

In October, Minister of Works Alfred Sears and a delegation toured the Blackwoods area.

Since then, Sweeting said reports that a task force is gearing up to deal with the problem make him anxious as he and the commoners are strongly counting on the government to bring them justice.

“I saw the reports when the minister spoke about it. […] but as of right now, there has been no communication to the commonage committee from any government entity whatsoever,” he said.

“We’re very hopeful, but we are also, you know we’re getting a little as you would say antsy, you know we want to get things moving get the ball rolling and start to make some more headway out, to deal with removing more of these structures.”

Sweeting said: “The committee as a whole, you know we don’t want to make it look like we’re showing up the government or stepping on anybody’s toes so we’re willing to wait a little bit longer and see what comes out of it and what happens and what is done by the government.

Sweeting said the committee plans to take legal action by the new year if there are no further developments.

“I don’t know how much longer we can hold off because of the pressure from the commoners to start taking matters into our own hands and taking the people to court and having them removed off the land,” he said.

Sweeting said the Spanish Wells group has fostered a relationship with the commonage committee on the neighboring Harbour Island to look out for one another incase they observe any new illegal activity.

“So we have people from Spanish Wells that are descended from both Spanish Wells and Harbour Island that farm that area and they report to us that if they had seen anything they would have let us know so that we could then get in touch with Harbour Island Commonage and let them know if anything is going on, on their property.”

At a press briefing at the Office of the Prime Minister yesterday, Press Secretary Clint Watson explained that the Ministry of Works is currently in the process of dealing with the issues surrounding illegal building.

Watson explained that the delay over dealing with the majority of illegal structures in shantytowns in the country was largely because the government had to take into consideration all the legal ramifications.

“That’s why this committee has been established, with all the persons involved to make sure that we’re going about it, the correct way, make sure that whatever decision is being made is being done methodically,” Watson said.