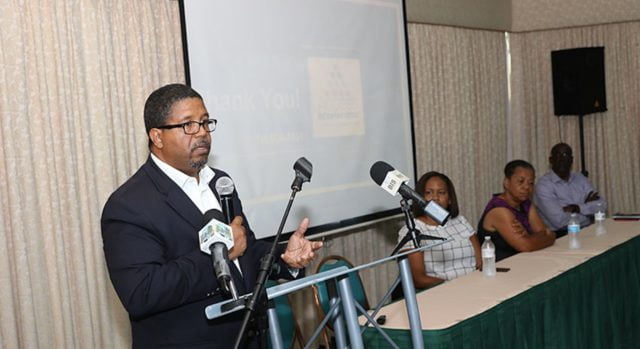 NASSAU, BAHAMAS- Deputy Prime Minister and Minister of Finance Peter Turnquest said yesterday that there is still a number of gaming houses that are up to date with the government taxes.

“We do have a number of outstanding payments from a number of the gaming houses,” Turnquest said.

“We certainly hope that the arrangements that have been agreed with the industry will be adhered to and we will be able to report to you shortly that everyone is living up the commitment been made.”

The government announced last May that a five per cent tax would be applied to all gaming patron’s deposits, all non-online games and digital sales.

It also announced a sliding scale tax to take effect on July 1st, 2018.

The taxes were delayed following an application filed in the Supreme Court by gaming house operators seeking leave for judicial review and an injunction to the government’s proposed stamp tax.

The government and gaming operators subsequently came to an agreement in February on the way forward, agreeing to apply the five percent patron tax to winnings under $1,000 and 7.5 percent to winnings over $1,000.

Last week, Turnquest said that there was a large revenue shortfall due to gaming taxes not being properly collected. He suggested that gaming operators held a misconstrued idea that they can challenge the government’s tax rates.

“It’s unfortunate that several of them believe that they can challenge the government’s ability to tax,” he said.

“But, hopefully that will be disposed of in short order and all of us can move on with surety as to what the taxation is from this industry; and we can better predict what the revenue flow is going to be.”