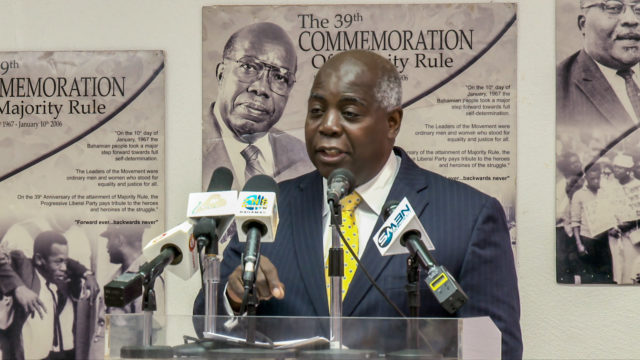 Boycott to continue until MP returned to parliament

At a press conference at PLP headquarters, Davis said he attempted to speak with Leader of Government Business in the House, Renward Wells, as well as Prime Minister, Dr. the Hon. Hubert Minnis, to resolve the issue, however, the conversations yielded no results.

“She was standing up for the rights of two single others and unceremoniously thrown under the bus by this government and we know it is political,” Davis said.

The drama was triggered by comments the Englerston MP made a week earlier, in reference to the firing of two Eleuthera airport officials, which were stricken from the record.

Speaker Moultrie has yet to indicate how long Hanna Martin will be suspended.

“She will not and we will not be deterred in that fight for the record,” Davis said. “I met yesterday (Monday) with the leader of government business and sought to avoid the conflict off of this issue, trying to ensure that the proper decorum is maintained but it appears there is no middle ground.

“I spoke to the Prime Minister as well but it seems that both the Prime Minister and the Speaker announced their positions publicly and it appears that they are on the course to suspend Mrs Hanna Martin and we will stand with her if she is suspended, and not return to the House or the Senate as long as she is out.”

On Sunday, Hanna-Martin said Moultrie was perverse in naming and suspending her and confirmed she plans to return to the House when it reopens on Wednesday at 10 a.m.

At the time, she said, the party views the suspension “null and void” as it goes against rule 88 of Parliament.