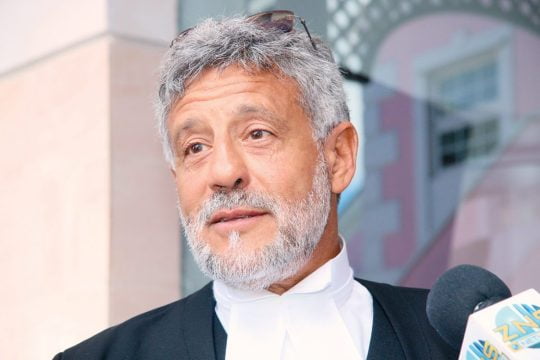 NASSAU, BAHAMAS — The judicial system in The Bahamas is in dire need of reform, according to human right activist and attorney Fred Smith, QC, who charged that over the years the government and courts have become comfortable with what he described as a “quick fix”.

“It’s not just the question of swift justice, speedy trials,” he said.

“It’s a question of ensuring people have good representation; that you have sufficient judges; that magistrates are given security of tenure; that they’re not simply appointed by the Crown; that we make, perhaps, smaller jury for the lesser crimes; that we balance the responsibility of the government to prosecute as well as the needs of the victims, and the consequences to the victim as well as constitution of human rights for people who are accused of crimes.”

Smith raised these concerns while responding to questions from Eyewitness News on the issue of capital punishment.

In response, Smith, who has litigated prominent constitutional matters in the country, said while he is opposed to the measure, the government must make reforms and improve access to legal representation before it raising any more matters that would involve the judicial system.

“The big challenge that we all face is that The Bahamas has a lack of financial and human resources,” he said.

“To this date — although recently there is a legal aid clinic set up by the government, — most people do not have the benefit of legal aid.

“Most young men and woman don’t have representation.

“We are stuck in some very old and archaic processes. We are not digitized.

“So, I can see the government really focusing on structural and fundamental changes to our system, which will allow greater protection to due process and greater efficiency in the court system.”

Following his swearing in ceremony in June, Chief Justice Brian Moree, QC, acknowledged that major reforms are need and pledged to improve the judicial system.

“…We’ve got to see if we can get an allocation of national resources which is consistent with the status of the judiciary under the constitution,” he said.

“We do need major reforms. We do need changes and we intend to address these challenges very directly in the short-term and I don’t think it’ll be business as usual.

“We do have an agenda of items and will see if we can implement changes and will be working with all stakeholders who are involved in the administration of justice to see if we can make substantive changes to improve the way we are conducting business currently.”