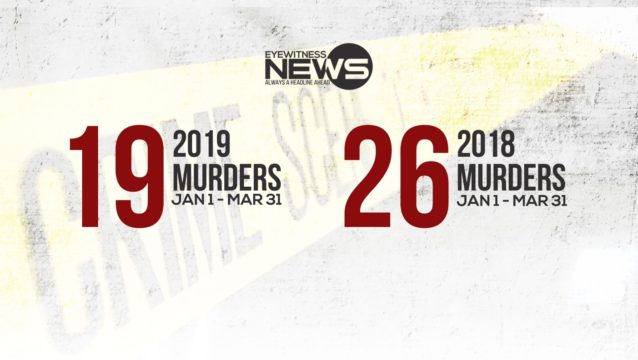 NASSAU, BAHAMAS  – Enhanced policing strategies and greater manpower management was attributed yesterday to the 26 percent decline in murders for the first quarter of this year compared to the same period in 2018.

“That has already commenced; using his plans for 2019.

The commissioner’s policing plan for 2019 has yet to be revealed to the public, but is expected to be tabled in Parliament.

Murders between January 1 and March 31, 2019, remain down 26 percent compared to the same period last year.

Last year, ended with 91 murders, the lowest on record since 2009 when 85 murders were recorded.

In his second national address for the year, Prime Minister Dr. Hubert Minnis praised his administration’s efforts in brining crime down.

He said after many years of increasing crime rates, “our neighborhoods are getting safer and more secure”.

“We are safer and more secure because of our comprehensive approach to policing, but we still have plenty work to do.

“We have a long way to go, but we are making strides in the fight against crime.”

One-hundred newly appointed police officers were deployed in various areas of the police force to shore up manpower deficiencies on New Providence.

One-hundred and thirty more recruits are expected to be trained this year; 100 for New Providence and 30 for Grand Bahama.

The government also plans to purchase an additional 90 vehicles for the police force.

The prime minister has insisting that the government will be “relentless in preventing and fighting crime”.

Following the fatal stabbing of a 15-year-old T.A. Thompson student on March 26, the government said it has to consider introducing “technological, innovative” changes within the public-school system to increase safety and security.

In recent weeks, the government signed a $1.9 million contract with ShotSpotter Technology to provide 92 state-of-the-art sensors that will trace gunshots in various areas of New Providence.

The government also plans to expand its closed-circuit television camera program to over 700 cameras.

In his recent address, Minnis said the government was reviewing other technologies such as body cams and dash cams for police officers.

In February, the government issued a request for proposals (FRP) for an entity to provide 200 cameras.

The government has committed to addressing the root causes of crime and pledged to develop target-based strategies, and modernize the branches of law enforcement.