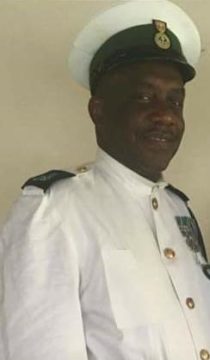 Perpall’s funeral was held at the Church of God Convention Center on Joe Farrington Road, which was followed by a grand procession with hundreds of RBDF officers and marines, led by RBDF Commodore Tellis Bethel.

Back on April 28, Perpall, who held the rank of Petty Officer, lost his life in the line of duty while sitting in the guard room at Government House when another Defence Force marine allegedly opened fire on him, hitting him several times.

Jevon Seymour, a 35-year-old Defence Force Marine was charged earlier this month with his murder.

Seymour was also charged with the attempted murder of Kelvin Hanna and Ellis Rahming.

Seymour has since been remanded to The Bahamas Department of Correctional Services until next month for a Voluntary Bill of Indictment.

Meanwhile the government has appointed four retired senior law enforcement officials, which comprise of an independent review committee to investigate the shooting death of Perpall.