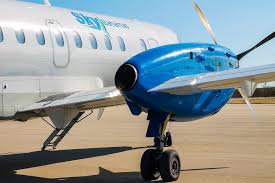 NASSAU, BAHAMAS – Sky Bahamas has secured an interim injunction against AOG Maintenance Company – the entity it was renting from at the Lynden Pindling International Airport (LPIA).

The order blocks AOG from selling its assets and from restricting access to those assets, Eyewitness News Online can confirm.

The airline has been grounded since July 8, and ceased operations the following the month when it was also evicted from its head office.

It secured the ‘ex parte’ interim injunction in the Supreme Court on Wednesday.

However, the order can still be set aside.

Eyewitness News Online understands that Sky Bahamas sought the application on information that AOG, which was subletting its head office, was moving to sell its property.

Captain Randy Butler, the airline’s president and chief executive has repeatedly suggested that his business had been victimized and intentionally sabotaged.

Those claims have been refuted by the Bahamas Civil Aviation Authority.

Also at the centre of Sky Bahamas’ woes was its inability to have its air operators certificate renewed by the Bahamas Civil Aviation Authority.

The certificate allows the airline to carry fare paying passengers, and it reportedly failed its safety inspection. Captain Butler and the airline have also disputed those findings.

It emerged last year that the Sky Bahamas owed NAD some $454,000 in passenger facility and security fees.

Those fees are collected from ticket prices on the airport operator’s behalf.

Butler has previously said the company has been making inroad to address.