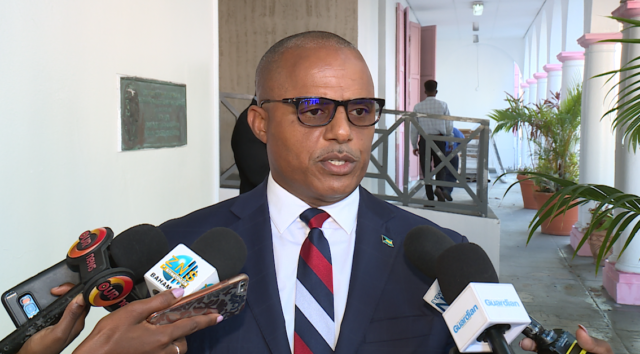 Body cam recordings will be used as evidence

The government issued a request for proposals in February.

The deadline to submit a proposal was March 25.

The government expects to make an announcement on the successful bidder by April 9 and execute an agreement by April 23.

“There were at least six companies who would have responded to the RFP.

“Now, the team will go to work to begin narrowing down [the list] and making a selection on who would be the preferred company and making some recommendations…

“It will probably take a few weeks or so and so I am hoping that — we are now at the end of March — sometime in April we should have a good idea as to which company would have won the bid to service the provider for the body cams.”

Asked how many of the bidders are Bahamian companies, the minister said he was not aware of the specific breakdown, but believes the majority of companies were non-Bahamian.

“I suspect — because we don’t have the technology here — in all likelihood it would be a foreign company supported by Bahamians, in partnership with Bahamians,” Dames said.

“I suspect that will be the approach, so we shall see.”

The RFP calls for the successful bidder to provide 200 body-worn cameras, 200 dash cameras and video storage solution for the Force.

There are approximately 2,600 officers – 410 senior officers and 2,190 junior officers, spread across the archipelago, according to a 2018 manpower audit.

When asked whether the number of cameras being sought will provide sufficient coverage of officers in the field, Dames said the 200 body cameras and 200 dash cameras represent a “good start” for coverage in New Providence.

He said he expects the police force to ultimately acquire a few hundred cameras over time as coverage is expanded on Grand Bahama and other major Family Islands.

“What we are looking at really is ensuring that those frontline officers, who are on the streets on a daily basis, especially those persons who work within the mobile patrol division and who are in divisions in New Providence on a daily basis, will be wearing body cams,” Dames said.

“If you break that down per day, per shift, 200 is a lot because that should put us in a good position to cover the streets of New Providence.

Thirty-four of the force worked as uniformed officers on the front lines.

“Those body cams would be worn and change over per shift of course, so that’s a good start.”

It has been proposed that the use of the technology will modernize law enforcement, and aid in further protecting officers and civilians.

All police0involved shootings are forward to the Coroner’s Court.

Dames was asked whether footage captured, particularly in incidents where an officer shoots someone will be released to the public.

He said the footage will be used as evidence and will have “chain of custody” that does not allow for interference, however, there was no indication that the public will be able to view the footage prior to or outside of the court process.