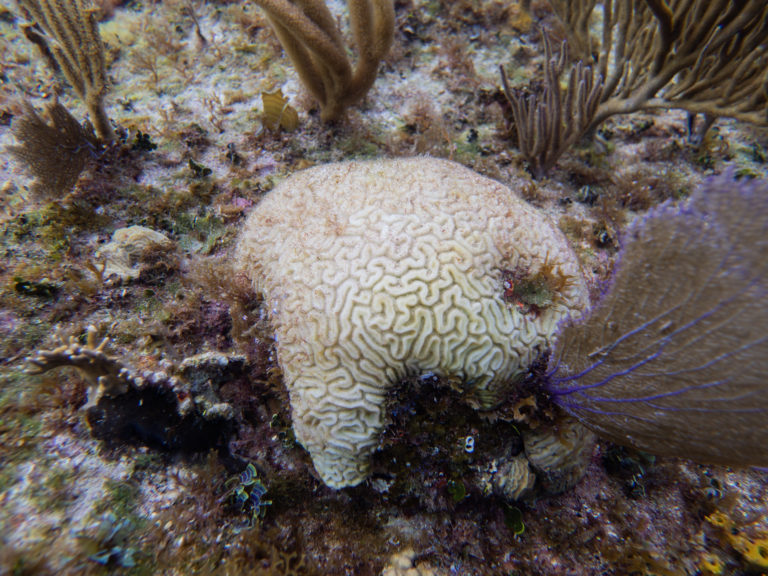 NASSAU, BAHAMAS — First verified in The Bahamas a year ago, the deadly stony coral tissue loss disease (SCTLD) continues to plague Bahamian waters, according to scientists from the Perry Institute for Marine Science (PIMS).

The disease is traveling up to 50 meters (55 yards) per day, killing hundreds of corals in its wake.

Specifically, PIMS scientists have confirmed the presence of SCTLD on reefs off Grand Bahama, New Providence and North Eleuthera.

Early assessments done by PIMS suggest that some species are more susceptible than others; brain corals, for example, are particularly susceptible to infection and often die within weeks.

Dr Valeria Pizarro, a coral reef specialist and senior scientist at PIMS, said: “The reality is the disease is spreading and it’s spreading very fast. If we lose those species which build up coral reefs, we might lose coral reefs in the long-term, with profound ecological impacts.”

The lethal reign of SCTLD

Although evidence suggests the outbreak of SCTLD began off the coast of Florida in 2014, the first case of the disease was not confirmed in The Bahamas until March 2020.

At that time, PIMS scientists discovered SCTLD had already killed a wide range of corals off Grand Bahama, including some species listed as endangered by the International Union for the Conservation of Nature (IUCN).

Less than three months later, PIMS confirmed the presence of SCTLD in coral colonies off New Providence. There, many corals harbored the tell-tale signs of white, exposed skeleton patches associated with the novel disease.

SCTLD has also been reported but not verified on Abaco and in the Exumas, said Pizarro.

Dr Krista Sherman, a fellow senior scientist at PIMS, said: “I’ve been diving since I was a teenager and I’m now in my 30s, and I’ve never seen so much coral death. It’s depressing.”

The recent discovery of an underwater treatment for SCTLD, however, gives hope to ocean conservationists.

Once PIMS receives approval from the Bahamian government, Pizarro will train local partners and begin the same treatment here in The Bahamas. Currently, there are enough doses to treat 1,000 infected corals, but time is quickly running out.

The team also has another challenge — deciding which corals will receive treatment.

While coral diseases are not uncommon in the tropics, SCTLD is in a league of its own because it spreads rapidly, kills quickly and many coral species are susceptible to it. According to the Reef Resilience Network, it has spread to nine countries and territories in the Caribbean region.

How can you help?

In the meantime, Pizarro urges “everyone that’s getting into the water to get involved”.

“We need as many people as possible sending us photos and information so we can prioritize which places we need to visit. We have to stop the spread.”

To report SCTLD in The Bahamas, visit PIMS’ website at http://www.perryinstitute.org/reportsctld.