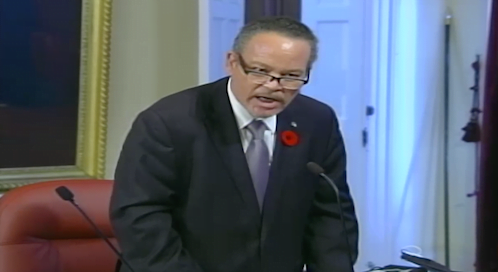 Bethel’s son participated in the wedding, which exceeded attendees permitted by emergency orders

NASSAU, BAHAMAS — A shouting match erupted between Attorney General Carl Bethel and Senator Fred Mitchell in the Upper Chamber yesterday morning, after Mitchell called on the attorney general to explain whether the government intended for curfew breaches to be placed on individuals’ criminal records.

In response, Bethel said the leader of opposition business was the last person who ought to speak on breaches of the orders, and referenced the senator being photographed at a restaurant in Freeport in September, shortly after arriving from the United States.

Bethel said: “You are nobody to raise an issue about who broke what COVID regulations in this place.”

Mitchell rejected the assertion of wrongdoing and insisted he had nothing to answer with respect to his travel into The Bahamas.

Mitchell then called on the attorney general to explain to the Bahamian public why an unapproved wedding, which Bethel’s son attended last Friday, took place without consequence.

“…What I ask the [attorney general] is would he explain the conduct of this infamous wedding which has taken place. This ain’ about me.”

Bethel, who attempted to move on from the matter, responded: “As to the infamous wedding, I have never made any comment to anybody in authority on this matter, period.”

Both men shouted over one another, maintaining their positions.

Mitchell said Bethel had a responsibility as a representative of the government to explain what happened at the wedding.

But Bethel insisted the “law has taken its course, except for you, except with you”.

Intervening, Senate President Dr. Mildred Hall-Watson asked whether Mitchell was requesting a withdrawal on the basis that the assertion concerning his travel and quarantine was incorrect.

But Mitchell noted the rules to now allow for personal imputations.

He said: “No, madame, I am not under cross-examination. He made that allegation about unlawful conduct. I am saying I had no unlawful conduct and that is irrelevant to his role as a minister of the government to explain the conduct of a relative of his at the infamous wedding.”

The senate president said: “The ruling is that the personal information has been withdrawn by the AG.”

The wedding of a communications officer in the Ministry of Health exceeded the maximum number of people permitted to attend during the ongoing state of public emergency in The Bahamas.

The Office of the Prime Minister advised no permission was granted for any weddings to be held with more than 10 people.

According to Police Commissioner Paul Rolle, citations and fines were levied against several people who participated.

He said the citations for breach of the emergency orders did not represent a slap on the wrist.

The opposition has called the matter a double standard.

In a post on his Instagram page on Tuesday, Carlyle Bethel, president of the Free National Movement’s (FNM) Torchbearers Youth Association, said: “I want to state empathetically that I had no part in planning and executing the wedding.

“I apologize if my judgment to stand in the wedding has caused any disappointment or concern.

“This COVID-19 pandemic is very serious.

“I have seen first-hand some of its devastating effects on lives through my outreach and community service efforts to assist those in need.

“I believe that if we all do our part and assist others, then we can make it through this together.”