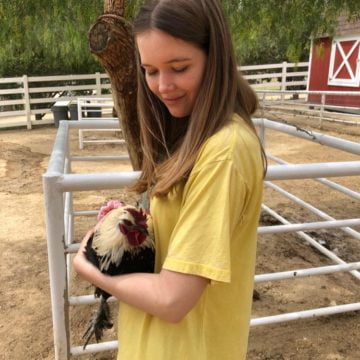 Jordan Lindsey, a 21-year-old California student, was tragically killed by sharks while snorkeling in The Bahamas. A portion of the nearly $75,000 raised to return her body home will be donated to The Gentle Barn, an animal rescue facility in Santa Clarita, California, where Jordan often visited to care for animals.

NASSAU, BAHAMAS- A week after Jordan Lindsey, a 21-year-old California student, was tragically killed by sharks while snorkeling with her relatives in waters off Rose Island, a portion of the nearly $75,000 raised to return her body home will be donated to The Gentle Barn, an animal rescue facility, where Jordan often visited to care for animals.

Ellie Laks-Weiner, the founder of The Gentle Barn, told Eyewitness News Online yesterday that Jordan loved The Gentle Barn and the wide range of animals on the six-acre property in California.

Jordan celebrated her 20thbirthday at The Gentle Barn.

“She loved all animals, but had a special relationship with our cow, Aretha,” Laks-Weiner said.

“I remember meeting her and being struck by her radiant smile, her warm eyes and the light that emanated from her.

“She was impossible to miss.”

Three sharks attacked Jordan, a communications studies major, while she was snorkeling with relatives in waters off Rose Island around 2 p.m. last Wednesday.

She was transported to hospital, but died of her injuries.

In an interview with ABC News, Michael Lindsey, Jordan’s father, said, “My wife was near Jordan, a few feet away, when the shark attacked. She said it happened so fast, and no one yelled anything.

On a GoFundMe page set up to assist Jordan’s family return her body to California has raised $74,917 in the last five days.

Donations continued to pour in as of yesterday.

According to Laks-Weiner, she learned of Jordan’s death after the media reached out to her.

She said she was devastated, noting that “the world has lost an angel [and] we mourn with her family”.

Asked about the donation to The Gentle Barn on behalf of Jordan and her family, Laks-Weiner said, “I’m blown away that in this time of tremendous tragedy, the family is remembering who Jordan truly is and is focused on something good and generous, honoring her and what was important to her.

“It really shows what a beautiful family they are and how much they loved Jordan. It’s inspiring.”

The Gentle Barn plans to erect a mural on its cow barn in Jordan’s memory, and will have the family come out to unveil it.

“We have reached out to the family and let them know that we grieve with them, we are thinking of them and would like to create a mural on our cow barn in Jordan’s memory and have the family out when they are ready,” Laks-Weiner noted.

“The Gentle Barn is a place of recovery and healing, and we’re hoping we can support the family; help them recover from this tremendous loss; and serve as a living memory of Jordan.”

The GoFundMe page, which can be found via https://www.gofundme.com/f/jordan-lindseyreads: “Jordan Lindsey was a beloved daughter, sister, girlfriend, and friend.

“On June 26, 2019, Jordan was tragically killed from a shark attack in The Bahamas.

“Jordan had the most beautiful, gentle soul and she will be missed deeply.

“Jordan’s body needs to be transported from The Bahamas back to her home of California, which is very expensive.

“This GoFundMe is being set up to help Jordan’s family pay for any travel and funeral expenses for Jordan’s body.

“Any amount helps and part of the money raised will be going to the Gentle Barn in California because Jordan loved the Gentle Barn and would have wanted them to have help too.”

The Gentle Barn was founded in 1999 and expanded from a half-acre property to six acres, complete with large horse and cow pastures, a barnyard for smaller animals and an organic vegetable garden.

It seeks to help animals and children alike.

A day after Jordan’s attack, the Ministry of Agriculture and Marine Resources issued a public advisory warning swimmers in New Providence to exercise “extreme caution” when in and around waters in New Providence, adjacent to island and cays, particularly the northeastern shoreline of Paradise Island, Rose Island and along the Montagu Foreshore.